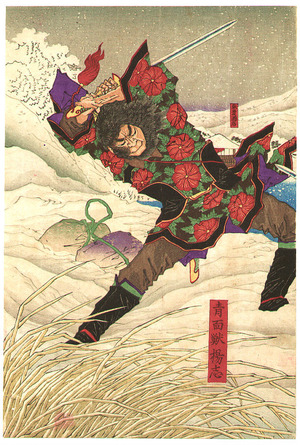 "Ryozanpaku no Fumoto ni Ryoketsu Yu wo Kisou" (Two Heroes battles at the foot of the Ryo-zan-paku Mountain) The two heroes from the Chinese popular novel, "Suikoden" (Shuihu zhuan) are battling against each other. Yang Zhi (Jp: Youshi, nicknamed as Seimen-ju which means blue-faced animal) on the left. Lin Chong (Jp: Rinchu, nicknamed as hyoshi-to which means the head of leopard). The group leader, Ohrin is seen on the boat on the background. Unlike most of the "action prints", this print is quite remarkable for its fine gradations in different colors on the snow and the careful printing. 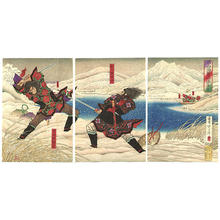