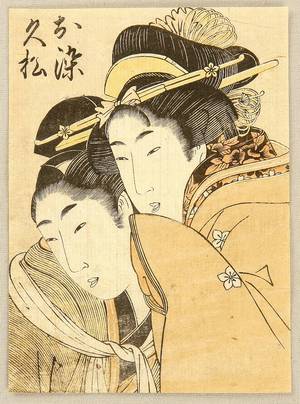 A frontispiece of a shunga album, made ca. 1798-1802, portraying Osome and Hisamatsu who were famous lovers in Kabuki play. Osome, the daughter a famous money-lending house, is in love with a young apprentice named Hisamatsu, who spent all his childhood with her, studying in the same temple. Unfortunately Osome's parents decided to marry her to somebody else and she ran away, followed by Hisamatsu. First they want to commit love suicide but a suddenly appearing monkey showman singing a ballad about their famous love affair, makes their mind change and they decide to live on together. Shunga or shunga albums were almost always signed in riddles or using a pen name.