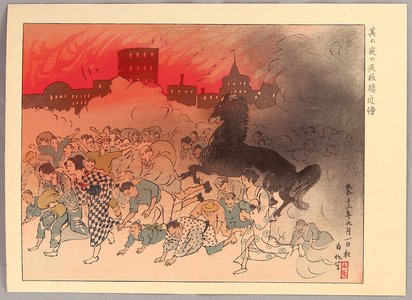 From the series, "Taisho Shinsai Gashu" (Pictures of Taisho Earthquake). "Konoyo no Gofuku-bashi Kinbo." (Around Gofukubashi Bridge on this Night). "Great Kanto Earthquake" September 1st in 1923, the massive earthquake jolted Kanto area. The collapsing building and the inferno followed the earthquake killed 140,000 people. It devastated Tokyo and the surrounding area. This one depicted the chaos around Gofuku-bashi Bridge. Many people were trampled to death. Some horses which were used to carry loads became wild.