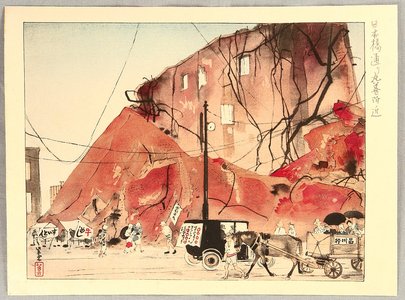 From the series, "Taisho Shinsai Gashu" (Pictures of Taisho Earthquake). "Nihonbashi Doori, Maruzen Fukin" (Nihonbashi Street, around Maruzen). "Great Kanto Earthquake" September 1st in 1923, the massive earthquake jolted Kanto area. The collapsing building and the inferno followed the earthquake killed 140,000 people. It devastated Tokyo and the surrounding area. This one depicted the Nihonbashi street which was the main commercial area in Tokyo. Maruzen was a large book store. A horse wagon is running instead of the street cars. Some shacks for the simple meals were popped up 3-4 days after the earth quake.