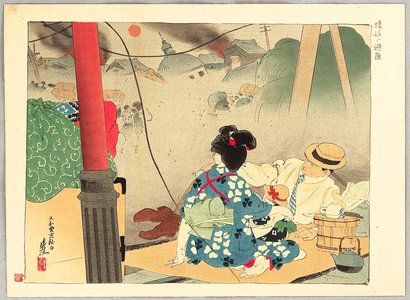 From the series, "Taisho Shinsai Gashu" (Pictures of Taisho Earthquake). "Densha Senrojo no Hinan" (Refuge to the Street Car Rails). "Great Kanto Earthquake" September 1st in 1923, the massive earthquake jolted Kanto area. The collapsing building and the inferno followed the earthquake killed 140,000 people. It devastated Tokyo and the surrounding area. This one depicted the people refuged between the street car rails. The place between the street car rails were considered as the safer area because they located in the middle of broad streets and were on top of paved stones.