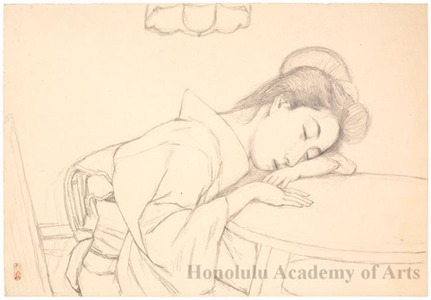 Honolulu Academy of Arts is fortunate to have several rare drawings by Goyö, who would create fine line graphite drawings of women in their private moments as warm-ups for his final prints. Most of his models were young waitresses or maids, whom he depicted with a simple, refined elegance. Goyö found his muses in two young women in particular, Kodaira Tomi and Nakatani Tsuru, the latter of whom lived with him as his mistress in his Tokyo home-studio. In these drawings and the final prints that resulted from them, such as Two Women After the Bath, as seen to your right, Goyö pays homage to the great ukiyo-e master of idealized feminine beauty, Utamaro. But unlike Utamaro, Goyö’s women were part of the 20th-century culture in which he lived, and they are rendered in a more naturalistic manner, with recognizable features. - “Prelude to the print” curated by Wendy Bennett 11/7/2007 - 1/20/2008