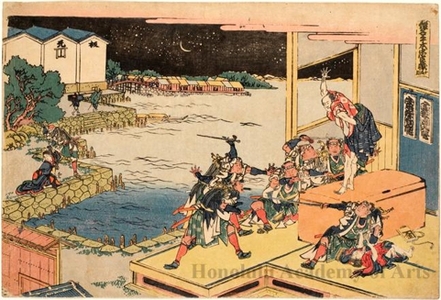 This print depicts a scene toward the end of the play. In it, Öboshi Gihei, a merchant of Sakai, is asked by Yuranosuke, the leader of these ronin (dispossed samurai), to supply them with weapons. Gihei defends the box in which he keeps the weapons, defying these conspirators, who had been sent to test his loyalty. A conspirator takes his son hostage, threatening to kill the son unless Gihei reveals the contents of the box. He refuses, thus proving his loyalty to the ronin. Hokusai combines two spatial treatments--an outdoor scene in Western-style perspective and an indoor scene in the traditional bird's-eye-view, with walls and roof removed. By the mid-eighteenth century, the Japanese knew Dutch paintings and etchings and their spatial conventions using one-point perspective. Like many progressive artists, Hokusai experimented with the logical Western perspective in some works, but later came to realize that a modification of it to accommodate the Japanese method was a better resolution for him. Subsequentlly he used this modified spatial treatment superbly, as seen in his world-famous landscape compositions. (Asian Art Museum of San Francisco, Hokusai Hiroshige, 1998) ******************** In a scene reminiscent of Hokusai’s earlier Kabuki portraits done in the Katsukawa School style, the merchant Öboshi Gihei strikes a dynamic pose as he protects a box of weapons intended for the forty-seven samurai protagonists of the story. Hokusai combines two spatial concepts in this print: an outdoor scene in Western-style perspective and an indoor scene in the yamato-e bird’s-eye view derived from Japanese painting, with walls and roof removed. Like many progressive artists, Hokusai experimented with Western perspective, but eventually came to favor a hybrid compositional style that accommodated traditional Japanese narrative techniques. This would form the basis for his distinctive style in the 1830s, represented by the Thirty-six Views of Mount Fuji series. “Hokusai’s Summit: Thirty-six Views of Mount Fuji” (09/24/2009-01/06/2010) ****************************** 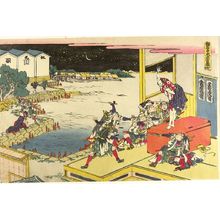 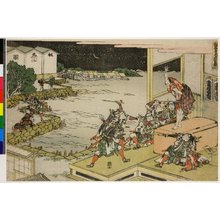 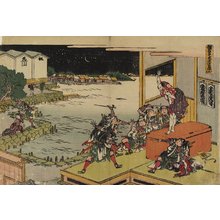 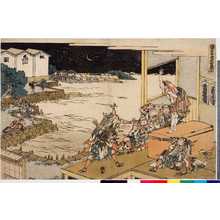 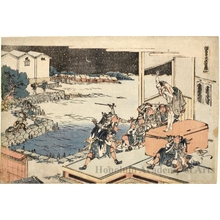 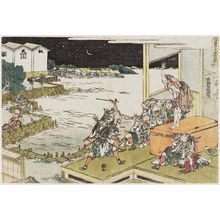