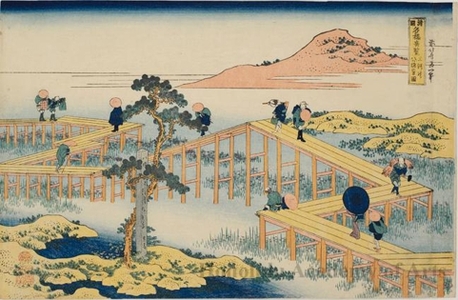 作品名: Ancient View of the Yatsuhashi Bridge in Mikawa Province

This print was conserved with the support of the Robert F. Lange Foundation. This print depicts the scene from Episode 9 of the Tales of Ise, in which Ariwara no Narihira composed an acrostic poem at an eight-planked bridge (yatsuhashi ) over a bed of irises (kakitsubata), starting each of its five lines with a letter from the word kakitsubata. The poem goes: Traveling far away I recall the days wearing Chinese-style robes and being with my beloved wife. According to the Sarashina Diary (11th century), the bridge had already ceased to exist in the middle Heian period, but the scene inspired many artists including Hokusai, and numerous prints and drawings of yatsuhashi have been produced. The most interesting visual element of the print is the zigzag pattern of the bridge. If drawn without the use of perspective, the print would have shown only horizontal lines. However, Hokusai drew the bridge in a mountain-like shape, with some parts of it higher than others even though there are no obstacles under the bridge. ALT TEXT This interesting bridge was part of walkway through an expanse of flowering irises. Its name, Eight-parts Bridge, describes a bridge construction type (yatsuhashi) that could consist of eight or more parts--a simple structure of narrow boards, which could be built on stilts in a zig-zag pattern to span marshy land or a pond. Here Hokusai tries to reproduce the ancient Yatsuhashi Bridge over the the irises, a site that figues in the Tales of Ise, the well-known story of Narihira, a famous and handsome nobleman and poet. On his way to the northeastern region of the country (that is, toward Edo), Narihira stopped at Mikawa and had lunch near the Yatsuhashi Bridge. The story inspired both poets and painters, who painted imaginary scenes of Narihira and this bridge. The actual bridge had apparently ceased to exist by Hokusai's day; he recreated the famous Yatsuhashi with figures contemporary to his time. (Asian Art Museum of San Francisco, “Hokusai and Hiroshige”, 1998) 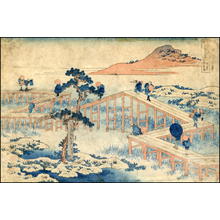 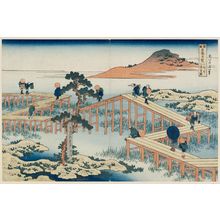 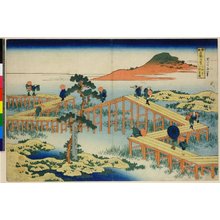 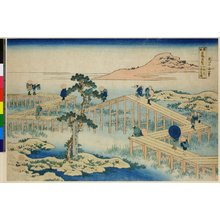 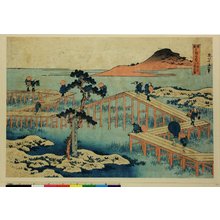 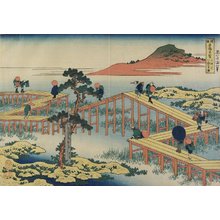 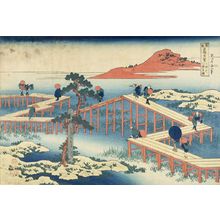 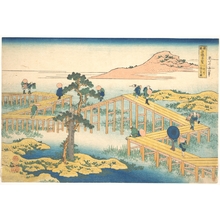 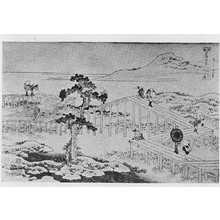 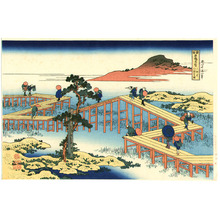 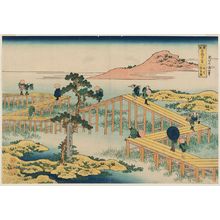 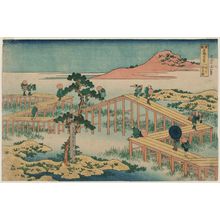 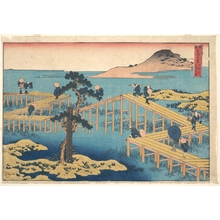