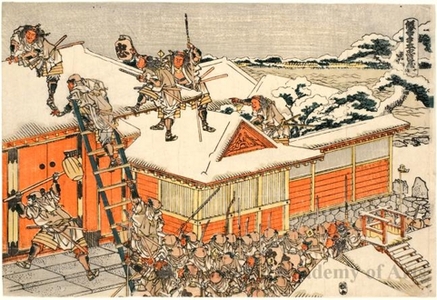 The print depicts the eleventh scene, the last act of the Chüshingura. It is a continuation of the illustration of scene 10. After careful preparation and planning, the ronin arrive at Kira's mansion, in the snow. They put up a bamboo ladder to climb to the roof; some are already on it. One man attempts to batter down the sealed gate with a huge sledgehammer. A sense of this crucial moment is conveyed by the figures crowded around the ladder. Hokusai combined Western-style perspective in the outdoor setting, with its typical low horizon, and Japanese treatment of buildings, which do not conform to the principles of Western perspective. (Asian Art Museum of San Francisco, “Hokusai and Hiroshige”, 1998) ******************************* This print depicts the eleventh and next to last chapter of the story. After careful preparation and planning, the samurai (now rönin, since they have lost their patron) arrive at the snow-covered mansion of the feudal lord who forced their master to commit suicide. One man attempts to batter down the sealed gate with a huge hammer, while others climb a bamboo ladder to the roof. Like the other prints from this series, Hokusai uses a combination of Western-style perspective, with a typically low horizon, for the background, and buildings that derive from traditional Japanese yamato-e narrative painting. Although no direct connection can be made between the two, the nearby etching by William Hogarth of a similarly crowded street scene makes for an interesting comparison with Hokusai’s print, showing the types of works that may have served as sources for Hokusai’s experiments using Western perspective. “Hokusai’s Summit: Thirty-six Views of Mount Fuji” (09/24/2009-01/06/2010) ****************************** 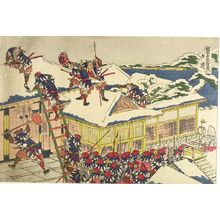 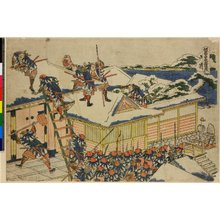 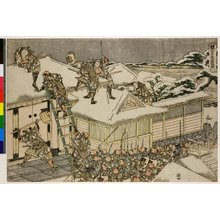 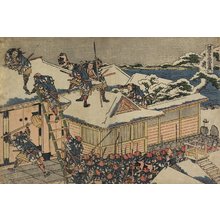 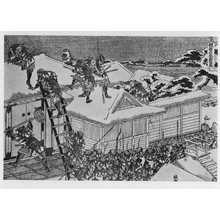 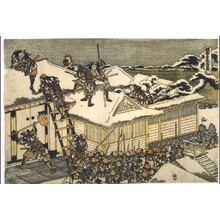 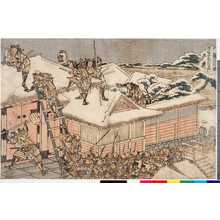 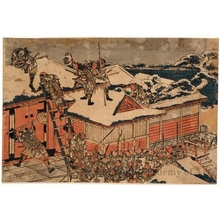 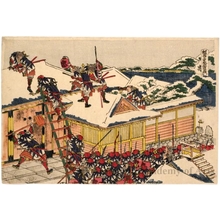 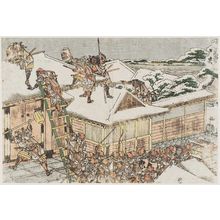