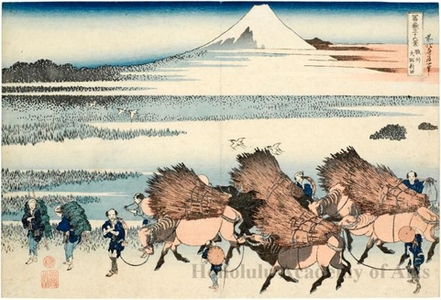 画題等: The print depicts early morning in the marshy paddies of Öno, with mist rising from the wet grasses while waterfowl skim the surface of the water. Fuji solemnly rises through the mist to the sky; it touches the upper edge of the picture. This ethereal landscape dramatically contrasts with the human activity revealed in the foreground. A group of farmers leads five oxen laden with mountainous bundles of reeds, while two women carry smaller bundles of grass on their backs. They have finished their morning labors and are going home for breakfast. ‘New Fields’ was a name applied to fields recently brought under cultivation. During the Edo period, the shogun and local governments made an effort to expand arable lands in order to support an increasing population, and also to increase taxable lands. Wild or marshy lands were reclaimed. The New Fields of Öno must depict an expanse of such marshy land being cultivated, perhaps for reeds. The simple design with fewer landscape elements successfully depicts a benevolent nature that embraces human life. The color scheme is also simple; a single shade of blue dominates, except for the pink sky on the right flank of Fuji and broad brown areas of reeds and oxen. The key-block was printed in black. (The Asian Art Museum of San Francisco, HOKUSAI AND HIROSHIGE – Great Japanese Prints from the James A. Michener Collection, Honolulu Academy of Arts: The Asian Art Museum of San Francisco, 1998 Page 97. Cat. 48) ********************* Öno was situated on the Tökaidö (East Sea Road) between the Hara and Yoshiwara stations. “New Fields” (shinden) was a name commonly applied to areas first brought under cultivation during the Edo period, in response to the growing population during this long period of political stability. Mount Fuji rises solemnly over a mist-covered marsh, while along the lower third of the print a group of men lead oxen laden with reeds, and two women help by carrying smaller bundles on their backs. The image of the sacred mountain shown here, with white egrets flying before it, may recall imaginary views of the mythical island of the immortals, Mount Hörai, encircled by cranes. Hokusai contrasts this otherworldly image of Mount Fuji in the background with the laborious scene in the foreground, but also instills a sense of idealism into the agricultural scene, following a centuries-old tradition in East Asia of finding spiritual wisdom in peasant life. “Hokusai’s Summit: Thirty-six Views of Mount Fuji” (09/24/2009-01/06/2010) ****************************** 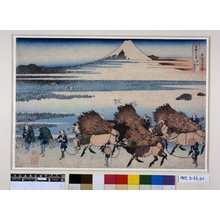 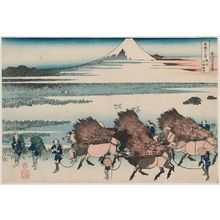 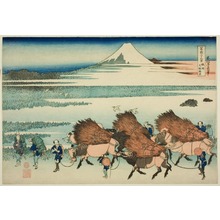 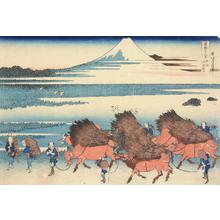 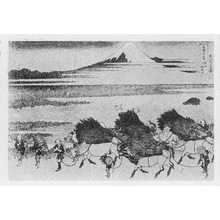 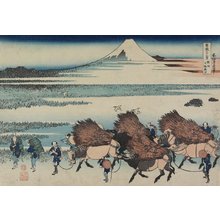 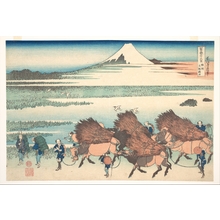 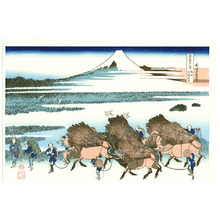 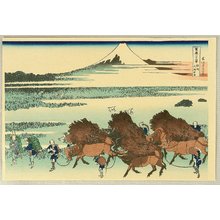 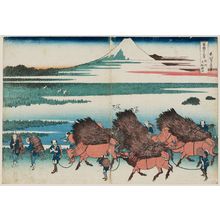 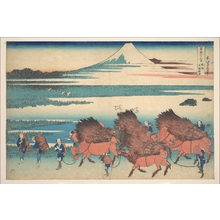