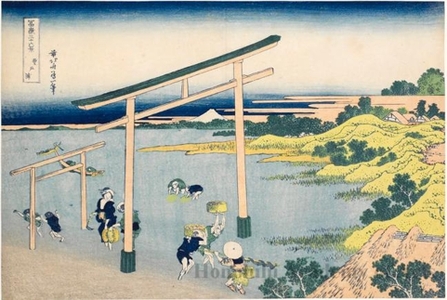 The print depicts people cheerfully gathering clams at low tide at the beach at Noboto on a summer day. Two men happily retreat with their full baskets, while another approaches the beach. A woman and a man with empty baskets are perhaps wondering if their spot is good; two children are seen playing their own games; and two men in the distance dig into the sand with their flat baskets. It is probably a day in early summer. Noboto, a small fishing village, was located on the east coast of the bay of Edo, but outside the city proper. The beach at Noboto had shallow water for a good distance, an ideal place for people to dig clams. There was a small shrine on the hill above the beach, and the two torii gates most likely belonged to it. Snow-covered Mount Fuji is seen through the larger torii. The composition is simple, only accentuated by these gates. The color scheme is also simple, using dark green and yellow-green, pale and dark blues, and brown for the torii and the roofs of the buildings. (The Asian Art Museum of San Francisco, HOKUSAI AND HIROSHIGE – Great Japanese Prints from the James A. Michener Collection, Honolulu Academy of Arts: The Asian Art Museum of San Francisco, 1998 Page 87. Cat. 38) ******************** The small fishing village of Noboto was located on the east coast of Edo Bay. With a large expanse of shallow water, it was a good location to dig for clams, and several people from the village cool themselves in the water on a summer day while enjoying this pastime. Above them stand two torii gates marking a Shinto shrine on the hill beyond the right edge of the print, the larger of which frames Mount Fuji, underscoring its sacredness. While some prints from the Thirty-six Views of Mount Fuji series emphasize the insubstantiality of human existence in the face of powerful natural forces (most notably Great Wave and Thunderstorm Beneath the Summit ), here Hokusai takes the opposite approach. The idyllic scene embodies the Shinto ideal of humanity in perfect harmony with a natural world that offers stability and protection, manifested both by the torii gates and Mount Fuji, gleaming purely white (a color symbolic of divinity in Shinto belief) in the distance. “Hokusai’s Summit: Thirty-six Views of Mount Fuji” (09/24/2009-01/06/2010) ****************************** 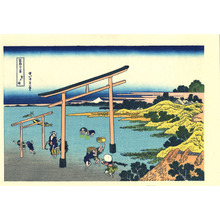 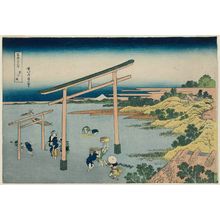 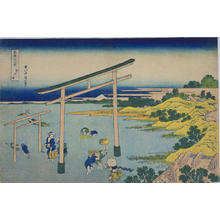 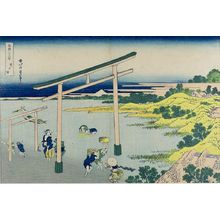 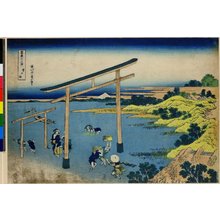 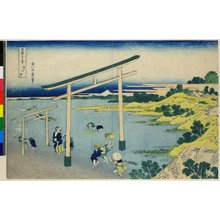 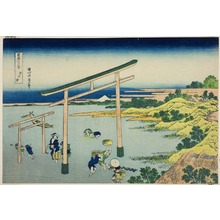 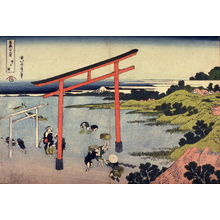 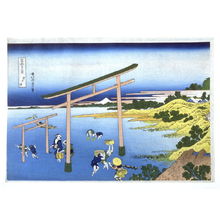 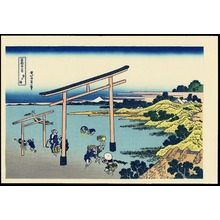 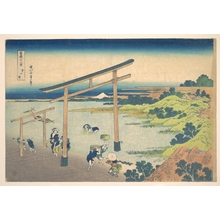 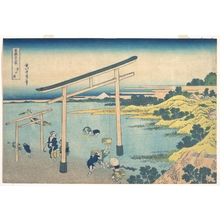 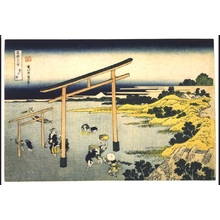 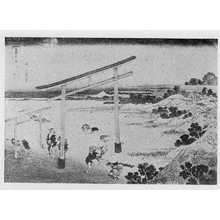 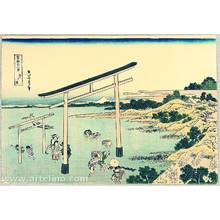 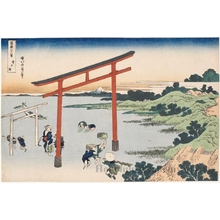 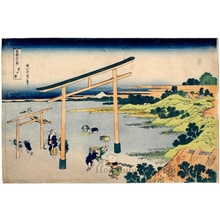 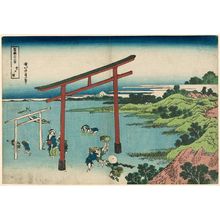 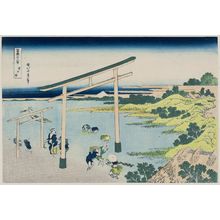 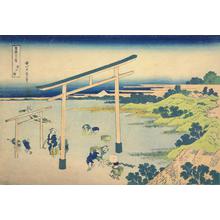