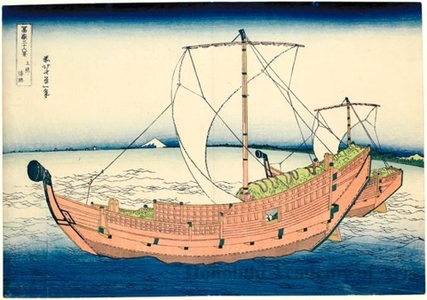 作品名: At Sea Off Kazusa

Two large sailing ships appear in the foreground. Hokusai must have closely scrutinized the actual scene and the ships, for he has depicted them in minute detail and with extraordinary thoroughness. The sails have caught the wind and are about to head out to the open sea. The curved line of the promontory extends to the left and continues as the curved horizon. It is not certain that Hokusai actually saw the curve in the horizon, but by his time, the theory that the earth is spherical had become common knowledge among the Japanese through Dutch contacts. Hokusai also observed that the color of the ocean changed in the distance from blue to green, and by this shift, he expresses the expansiveness of the open sea. Fuji appears at center, and small sails are seen to the left, on the horizon. Unlike prints of bays and rivers, in his seascape prints Hokusai depicts the open sea route that connected Edo and the Bösö Peninsula; the kind of ships depicted differ from those on rivers. During the Edo period, there were no ships solely for passengers on major seaways. Only pleasure boats and ferries, used on rivers, canals, and bays, exclusively served passengers. But seagoing cargo ships also took passengers. Constructed of fir or cedar, and designed for both sail and oars, cargo ships had one mast, a huge sail of burlap, and accommodated passengers beneath the upper deck in a large cabin. This seems to be the type of ship Hokusai depicts here. The key-block was printed in blue. (The Asian Art Museum of San Francisco, HOKUSAI AND HIROSHIGE – Great Japanese Prints from the James A. Michener Collection, Honolulu Academy of Arts: The Asian Art Museum of San Francisco, 1998 Page 84. Cat. 35) ********************* Unlike the ferries and fishing boats featured in most of the Thirty-six Views of Mount Fuji prints, this scene is noteworthy for its minutely detailed depiction of two seagoing cargo ships. Hokusai’s intimate familiarity with the ships suggests that he may have drawn them from life, although it is equally possible that they might derive from books with woodblock-printed illustrations introducing new technologies that were popular in the nineteenth century. The curved line of the horizon is particularly interesting; by Hokusai’s time, the theory of a spherical earth was widely known in Japan from Dutch sources. The color gradation of the sea to a pale green in the distance also indicates a close observation of nature, and is unusual in Edo period prints. “Hokusai’s Summit: Thirty-six Views of Mount Fuji” (09/24/2009-01/06/2010) ****************************** 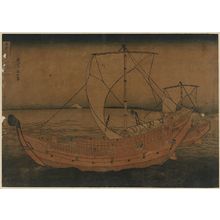 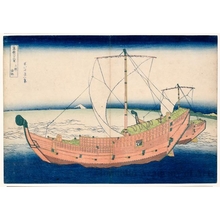