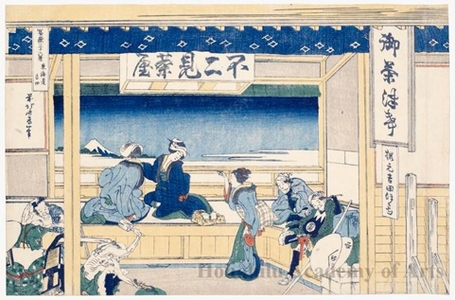 This print is the only one in the Fuji series to show the interior of a building and travelers in the foyer and on the raised platform of a room. The sign that reads “Fuji-viewing Tea House” announces that the house serves tea as well as offers travelers a good view of the mountain. Two women already occupy the raised platform. One gazes at Fuji through a large open window, and the other may be ordering cups of tea from the waitress standing in the foyer with her serving tray. Pointing to Fuji, she seems to be advising her clients to view the mountain while waiting for their tea. The palanquin on the floor at the entrance, with one bearer visible, was perhaps used by one of these women. An old man in front of the palanquin repairs a straw sandal, pounding the material to soften it. Two men at the right, apparently exhausted after their long walk, sit on the platform near the entrance, puffing tobacco. The composition is somewhat similar to that of Turban-shell Hall of the Five Hundred Rankan Temple (cat. 28), where people gaze at the mountain from an outdoor veranda. This print is livelier, with more animated people. Before Hokusai became famous as a landscape print artist, he produced many prints depicting beautiful women, a classic subject. This print reveals that this earlier accomplishment also served him in his new landscape series. Yoshida, now part of the present-day city of Toyohashi, was a famous castle town on the Tökaidö Road. Here Hokusai makes his subject a scene of human interaction with Fuji, not the renowned landmark. Hokusai placed his publisher’s name, Eijudö, and its marking on the round hats near the door post, a witty way to include such an advertisement. The key-block was printed in blue. (The Asian Art Museum of San Francisco, HOKUSAI AND HIROSHIGE – Great Japanese Prints from the James A. Michener Collection, Honolulu Academy of Arts: The Asian Art Museum of San Francisco, 1998 Page 83. Cat. 34) ********************* Yoshida, now part of the present-day city of Toyohashi, was a famous castle town on the Tökaidö (“East Sea Road”). Here, Hokusai takes as his subject the interaction between different people arriving at a teahouse. Two affluent women sit on a raised veranda (their social class literally expressed through their highest position), admiring the view of Mount Fuji pointed out by the waitress. Above them, a sign reading “Fuji-viewing Teahouse” indicates the primary attraction of the establishment. In the left corner, a man rests on a palanquin (perhaps that used by the women), while another pounds a straw sandal to soften it for repairs. On the other side, two men pause to enjoy their pipes. The one on the right is a pilgrim to Mount Fuji; his hat features the character Ei, indicating that the print was published by Eijudö. Depictions of pilgrims and travelers bearing items with the marks of Eijudö are common in the Thirty-six Views. This not only was good advertising, but it might also have been a way for Nishimura Yohachi, the owner of Eijudö and a known member of the Fuji Cult, to symbolically complete his own pilgrimage to the mountain. “Hokusai’s Summit: Thirty-six Views of Mount Fuji” (09/24/2009-01/06/2010) ****************************** 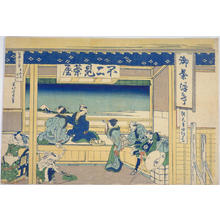 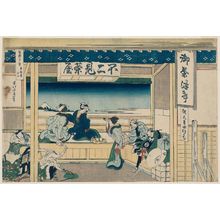 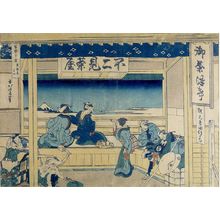 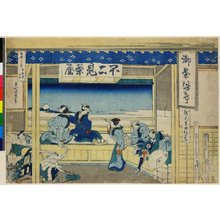 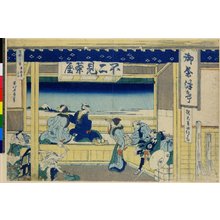 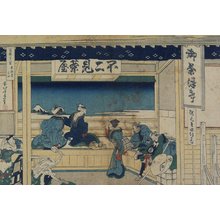 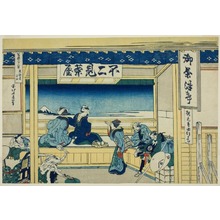 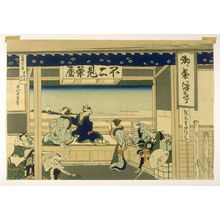 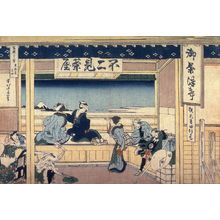 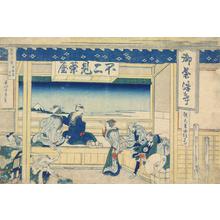 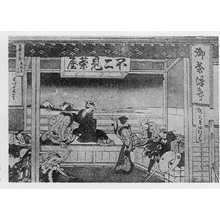 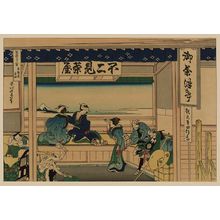 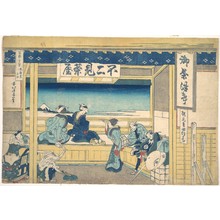 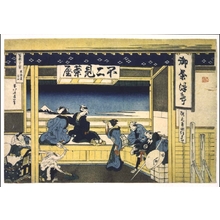 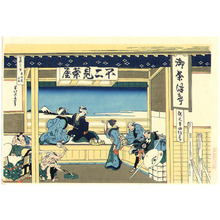 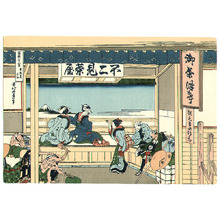 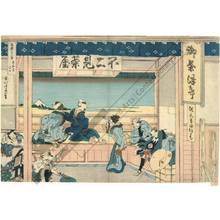 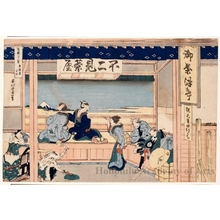 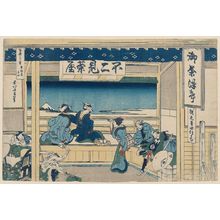 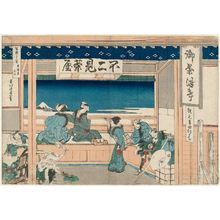 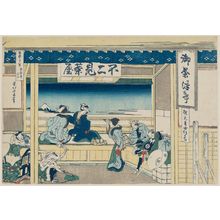 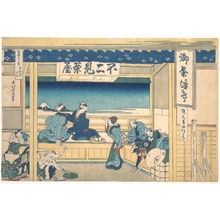