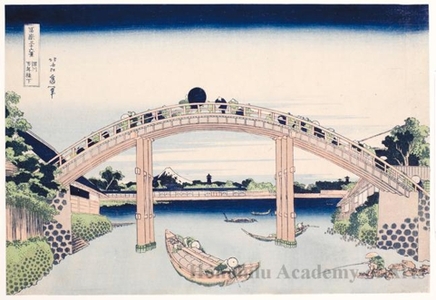 作品名: Under the Mannen Bridge at Fukagawa

In this print Fuji appears in the far distance, viewed from under the Mannen Bridge in the Fukagawa district of Edo (Tokyo). The Manen Bridge crossed a small river that flowed into the Sumida River, visible in the middle distance. The composition owes a clear debt to Western perspective, with the gradual diminishing in size of buildings and other objects as they recede in the distance. The perspective is not, however, consistent, but reflects an imperfect borrowing of a foreign system of composition. The view of Fuji seen in this print is characteristics of many of the images in the series, in which the famous mountain appears almost as an afterthought. Hokusai produced this representative series of landscape prints when he was in seventies. It seems that various artistic training, his knowledge of literature and culture and creativity are all culminated in this period when he was using his artistic name Hokusai Iitsu (literary means “Complete with one stroke.”) from 1820 to 1833. (from Hokusai His Students exhibition 1/30/2007-) - - - - - - - - - - This print depicts the beautiful arch of the Mannen Bridge (Ten Thousand years Bridge), which spanned the Onagigawa River, a small stream that flowed into the Sumida River in the Fukagawa district of Edo. Here the Onagigawa flows under the bridge to join the Sumida, shown as a horizontal dark area in the middle ground beyond the bridge. On the far bank of the Sumida is a long row of houses and shops. Beneath the tall arch of the bridge, Fuji rises at left of center, dark blue in the distance. Hokusai had experimented with a similar design showing Fuji under an arched bridge (Kondö 1965, fig.6). There, closely following Western-style perspective, he crowds the picture with numerous elements. The design obeys the principles of perspective but seems too rigid, lacking in artistic interpretation. In this print, Hokusai improved his design by combining Western perspective with some Japanese modifications. For example, he made the recession into space less extreme and involved fewer elements, creating a shallower and more open space, with traditional decorative treatment in a traditional space. The key-block was printed in blue. (The Asian Art Museum of San Francisco, HOKUSAI AND HIROSHIGE – Great Japanese Prints from the James A. Michener Collection, Honolulu Academy of Arts: The Asian Art Museum of San Francisco, 1998 Page 58 Cat. 9) - - - - - - - - - - Hokusai regularly incorporated elements of Western perspective into his print designs from early on. During his period of apprenticeship in the Katsukawa School, he was already making uki-e “perspective pictures,” following a popular trend represented by artists such as Okumura Masanobu (1686-1764) and Utagawa Toyoharu (1735-1814). Uki-e had an air of novelty and exoticism that made them highly marketable to an audience eager to learn about foreign ideas. Most of the prints in the Thirty-six Views were done in a hybrid style that utilized Western perspective more subtly, but this print is rigidly arranged toward a single point in the distance, marked by a tower just visible on the horizon. Mount Fuji stands off-center to the left, framed and partially obscured by the arching bridge, while lines of buildings along the bank recede into space on either side. “Hokusai’s Summit: Thirty-six Views of Mount Fuji” (09/24/2009-01/06/2010) ****************************** 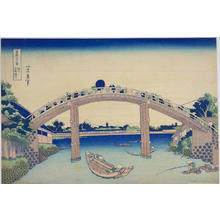 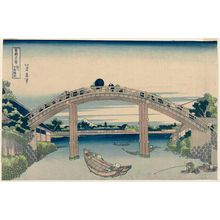 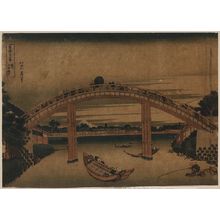 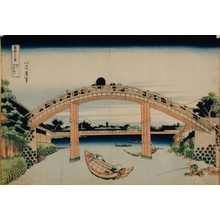 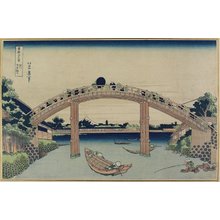 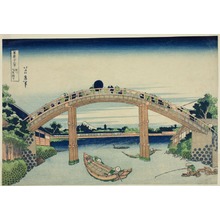 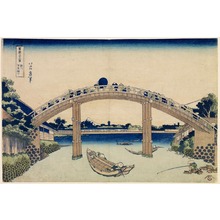 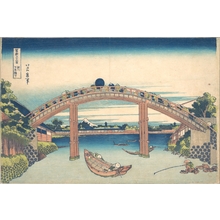 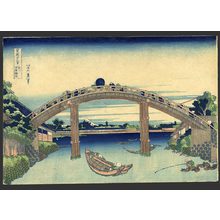 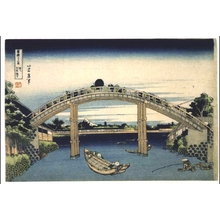 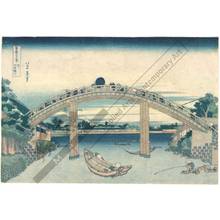 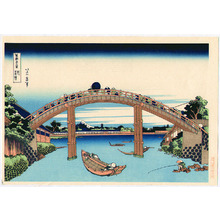 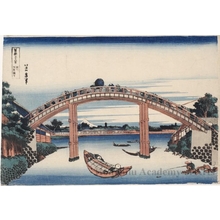 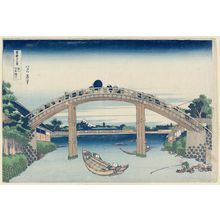 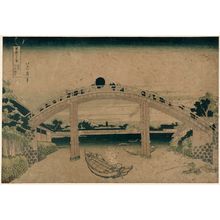 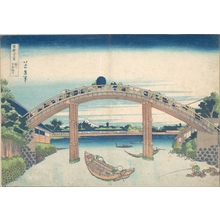