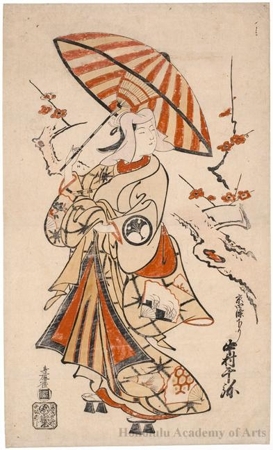 Red lead (tan) was used to color prints. It was the second development of ukiyo-e technique, the first being black and white prints, or sumizuri-e. This is perhaps one of the finest prints of its kind. According to James A. Michener, “when the Japanese publishers of the Ukiyo-e Taisei (which reproduced over 5000 prints) sought a distinctive cover for their series, they chose this Kiyomasu, and as a result it has become the most widely known of all tan-e. The position of the actor, his balance, the counter posing of the umbrella, and the harsh modeling of the drapery combine to produce a most striking design.” (from Daring Moves Exhibition, 8/1/06-) ALT TEXT Kiyomasu was a member of the prestigious Torii School of artists, who dominated the world of Kabuki graphics from the late 1600s to the late 1700s. Artists of the Torii School turned out all kinds of theatrical material, from posters to programs, but were perhaps best known for their "actor images," such as this one. The Torii style was typically characterized by the thick, bold lines seen in this print. Although little is known about the play or character represented in this image, the actor Nakamura Senya I (dates unknown) can be identified by the large crest prominently displayed on the sleeve of his kimono. In the Edo period, every family had its own crest, and in the realm of Kabuki an actor's crest was frequently incorporated into his costume. A Kabuki fan's ability to recognize various actors' crests contributed to the relationship between actor and audience. This print is one of the best extant examples of the older tan-e or "red painted" style, in which red or orange color is applied with a brush after the initial black and white printing. 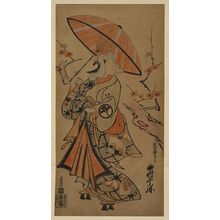 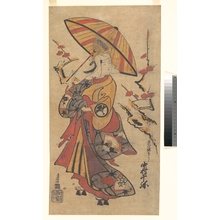 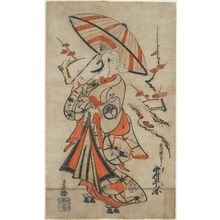 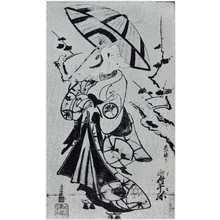