Torii Kiyonaga was a student of Torii Kiyomitsu, one of the most prominent early artists of Kabuki-actor prints, in which the Torii School specialized. Consequently, it comes as no surprise that Kiyonaga also produced many actor prints during his youth. After the rival Katsukawa School of ukiyo-e became popular due to their unconventional way of depicting actors’ physiognomy, in particular the dramatic poses they assumed at the height of their performances, Kiyonaga gradually began to shift his focus to bijinga, or pictures of beautiful women. Kiyonaga’s women are usually tall and slender, with elongated bodies in stately poses. This print was created during the transitional period shortly before he established his hallmark style of female beauty. Reminiscent of sketches by Edgar Degas (1834-1917) a century later, the scene depicted here is a popular ukiyo-e subject. Before modern air-conditioning, a cool bath not only was one of the few ways one could gain relief from the oppressive summer heat, but it also provided ample voyeuristic opportunities for ukiyo-e artists and the men who bought their prints. “Midsummer Night’s Pleasure” 08/05/2010-10/10/2010) ********************** 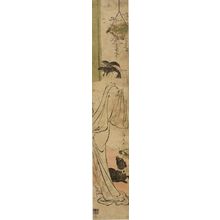 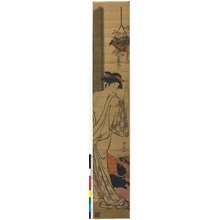 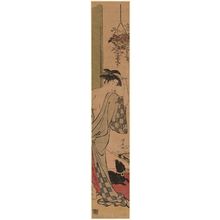