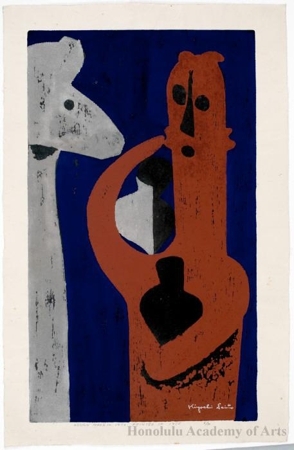 Haniwa are ancient clay funeral sculptures found at tomb mounds from the Kofun era (300-710 CE). They are thought to have served as attendants for the deceased in their after-life, and also to have had a practical function in preventing erosion. Haniwa are usually unglazed ceramic pieces ranging in shape from the simplest cylinders to detailed renderings of architecture, military equipment, and human and animal figures. Simple and stylized, haniwa are reminiscent of minimalist and surrealist sculptures by modern artists such as Henry Moore and Isamu Noguchi. In fact, Saitö seems to suggest a resonance between these ancient Japanese sculptures and Modern art. The orange-brown haniwa with a black urn is depicted against a contrasting dark blue background, with its simply cut facial features creating a comical appearance. This print bridges the gap between primitive and modern aesthetics. (from Saito Kiyoshi exhibition 3/20/07-)