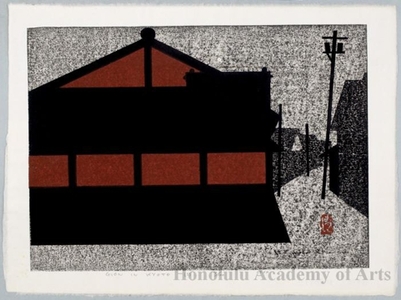 Gion is Kyoto’s famous geisha district. It is a historic area of traditional buildings and narrow streets that preserves the nostalgic beauty of earlier times. Many wooden teahouses and restaurants line its alleys, and geisha still may be seen in the late afternoon, walking before their business hours. This print focuses on a red-walled building boldly outlined in black, on the left. Other motifs such as the buildings in the background are depicted in different hues of gray. The print portrays Japanese buildings as simple geometric structures, with an emphasis on their functionality. Saitö frequently focused on stylistic elements within ancient architecture that could also be found in modern art. His depiction of these elements incorporated a modern aesthetic resembling that of innovators from the Bauhaus art school movement (1919-1933), a similarity noted by German architect Bruno Taut (1880-1938).