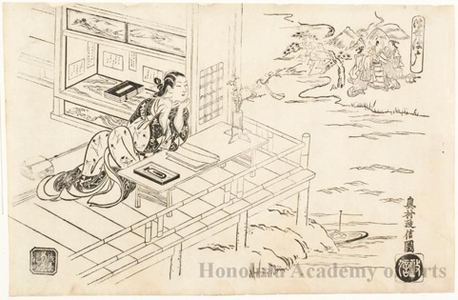 Lady Murasaki (Murasaki Shikibu), the author of The Tale of Genji (Genji Monogatari), is shown here in Edo period clothing. Seated at a desk on the open veranda of Ishiyama Temple, she is depicted composing her famous novel. Her kimono is decorated with short phrases in grass script including the name ""Yukihira"" on her sleeve--an oblique allusion to the exile of the courtier Yukihira and his affair with the saltwater carriers Matsukaze and Murasame. A parody of this incident is depicted in the background, suggesting that Lady Murasaki is pondering the twelfth Suma chapter of her novel, which is based on the Yukihira story. This is perhaps the final page from an unidentified album of twelve designs executed by Masanobu in the 1720s. (from Tale of Genji exhibit 1/11/2006-) --- Masanobu worked throughout the entire period of early Japanese printmaking, and produced well-known ehon (picture books) of writers, like this portrait of Lady Murasaki Shikibu, the author of The Tale of Genji. Although Masanobu lived long enough to develop advances in color printing, his early work utilized black monochrome printing, as shown. The Academy's print was glued down to a secondary sheet of paper in the 1930's, had numerous losses in the original paper support along all the edges, and was severely soiled and rubbed from handling. A conservation treatment removed the print from its secondary support, and the stains and discoloration were reduced using aqueous methods. Losses in the paper support were filled with a comparable Japanese paper, after which the work was humidified and flattened, and hinged to acid-free museum board. (from Paper, Ink, Line and color exhibition 10/22/2003-)