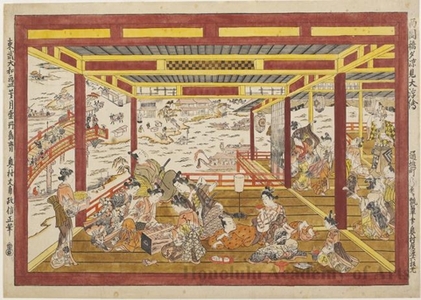 This hand-colored print depicts a merry scene at a teahouse near Ryögoku where guests, geisha and courtesans are enjoying board games and dancing while they listen to music and drink alcohol. To the right, a comical man holds a fan depicting a portrait of the Kabuki actor Danjürö II in his famous Shibaraku role. This splendid large print was executed using the Western concept of perspective, which in Japanese is called uki-e, literally meaning to "float up" from the surface. Ukiyo-e artists studied Western art introduced into the restrictive atmosphere of Japan during the late Edo period, and artists such as Masanobu enthusiastically incorporated Western techniques in their painting and prints. Masanobu is thought to be one of the first generation of artists in the development of uki-e. That this print is an early attempt at perspective is reflected in the unnatural relationship of the figures to the background. (Feb 2011)