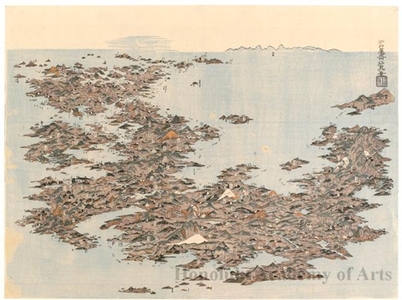 作品名: A Picture of Famous Places in Japan

Kitao Masayoshi began his career as a student of Kitao Shigemasa, two of whose prints appear in this exhibition. This rare print was the first work of its kind in Japan. Both a map and an almost photographic picture of the Japanese islands, this print presents Japan from a bird's-eye view, looking from the east towards Korea, which appears on the horizon. Each of the 68 ancient provinces is labeled in rectangular cartouches, as are over 700 individual places - mountains, towns, islands, temples, and hot springs. Mount Fuji, for example, appears near the lower center of the print. It is likely that Masayoshi was inspired in the creation of this print by European etchings that incorporated bird's-eye views of European cities, introduced into Japan by the Dutch. (from Uki-e exhibition 2004: June-August)