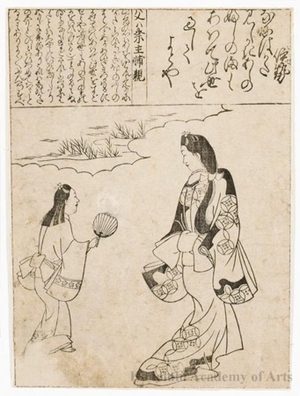 画題等: This image comes from volume one of the illustrated book Sugata-e Hyakunin Isshu (The hundred poets illustrated) by Hishikawa Moronobu. Moronobu is considered to be a founder of the genre painting tradition that would come to be known as ukiyo-e, “images of the floating world.” The text at the top of the page gives the names of Ise (one of the best thirty-six poets of the 10th century) and her father, and interprets one of Ise's poems, which is the basis of the illustration. The poem reads: Bay of Naniwa: Must I spend my life without meeting him, Even for an interval as brief as these reed-nodes? This painting style is called Mikaeri bijin (Beauty Looking Back), which was established by Moronobu. Rather than focusing on the face, Moronobu emphasizes the streamlined shape of the body and the kimono. In this way, the design of kimono is clearly seen. The woman is perhaps based on the image of a wealthy merchant’s daughter. The bold designs on the shoulder and upper back, sleeves and bottoms are typical of the Genroku period (late 17th century) when popular urban culture began to blossom. ("VOGUE in Japan: Edo Fashion through Japanese prints" exhibition 07/30/08-)