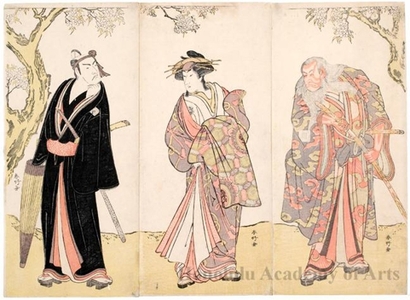 As a pupil of Katsukawa Shunshö and a member of the Katsukawa School of printmaking, it is no surprise that Shunkö specialized in yakusha-e, or "likeness prints" of Kabuki actors. Many of his prints are considered to be equal to those of his master Shunshö, the pioneer of yakusha-e. (For a closer comparison, see The Onnagata Actor Nakamura Rikö I as Agemaki with Two Attendants, on view in the Japan Gallery.) In the late 1780s, the artist lost the use of his right arm, leading to the creation of his own distinctive style- a "close-up" portrait style known as ökubi-e (large head pictures). In this print, Shunkö has portrayed three famous Kabuki actors as Sukeroku's main characters, Sukeroku, Agemaki, and Ikyü. The play, loosely based upon the events described in the Soga Monogatari, or Tale of the Soga Brothers, is a reinterpretation of a revenge story well known to Edo-period audiences, in which two brothers seek retribution for their father's murder. Sukeroku would be easily recognized as the samurai Soga Gorö, one of the brothers disguised as a commoner. The villain, Ikyü, would also be recognizable as the samurai responsible for the murder of the brothers' father in the 12th century. The artist's use of color, especially in the kimono patterns, shows his intense attention to detail. Sukeroku is seen holding his signature umbrella, a symbol added in the 1716 production by Ichikawa Danjürö II, the "original" Sukeroku, to give the play a "softer" style. If one looks closely, the artist's signature can be seen towards the bottom of each panel, close to each character's body. 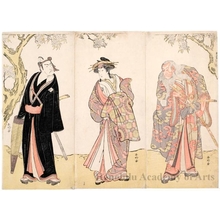 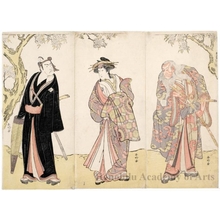