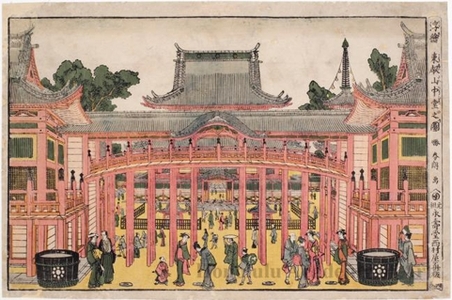 This print demonstrates Hokusai's knowledge and use of Western perspective. It was created when Hokusai was in his late 20s and using the artistic name Katsukawa Shunrö, after his master Katsukawa Shunshö (1726-92), who specialized in yakusha-e (actor prints). Hokusai and other artists tried to learn and apply the principles of Western-style perspective: a single, fixed view point, low horizon, and a diminishing of size from foreground to background in order to obtain the visual effect of distance. Hokusai's Shunrö period lasted from 1779 until 1794. During this time, Hokusai produced a number of actor prints in the Katsukawa School style. This was thought to be Hokusai's training period, during which time he became familiar with print production and with the Katsukawa School style. (from Hokusai His Students exhibition 1/30/2007-) 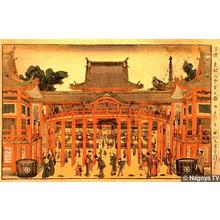