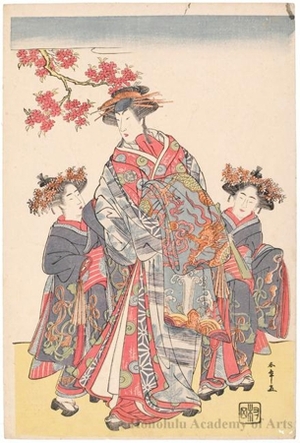 Nakamura Rikö (I), in his role of the leading yüjo (courtesan) Agemaki, is accompanied by two young kamuro (attendants). A famous courtesan, Agemaki figured prominently in the many Sukeroku dramas written for Kabuki. The basic storyline is as follows: In the disguise of a gallant townsman, Sukeroku seeks to recover a precious sword stolen from his stepfather. Sukeroku finds the sword in the possession of Hige no Ikyü, lover of Agemaki, the famous beauty, who, in the meantime, has renounced her lover in favor of Sukeroku. Ikyü is finally slain by Sukeroku, who recovers the lost weapon. Agemaki is one of the great heroines of Edo period Japan, and Sukeroku one of the three most famous otokodate (chivalrous men), who were considered “champions” of the common man. (From Daring Moves Exhibition 8/1/06-) ALT TEXT Shunshö, founder of the Katsukawa School of printmaking, was best known for his depictions of beautiful female figures and his pioneering work in creating yakusha-e. Though the Torii School may have been more popular at the turn of the 18th century, many Torii pupils were won over by the Katsukawa School's focus on the creation of more true-to-life works. In this print, actor Nakamura Rikö I is Agemaki, Sukeroku's lover and Edo's most famous courtesan. Not only has she pledged her love to the hero, but she is also one of the few who know his true identity and mission of vengeance at the onset of the play. She is so devoted to Sukeroku that she even attempts to convince his mother that her son has not forgotten his father in one of the play's more dramatic scenes. Sukeroku's deep sense of filial piety would certainly be seen as a samurai virtue by Edo audiences; as such, it creates an interesting dichotomy by which Sukeroku, the "commoner," enacts these values. Agemaki's character increases the tension between Sukeroku and Ikyü, who vainly clamors for her affections. In typical Katsukawa fashion, this print focuses the viewer's attention on each of the characters displayed through stunning use of color and detail, especially in the various layers of Agemaki's kimono. Shunshö's signature and the censor's seal can be seen in the lower right-hand corner of the print. 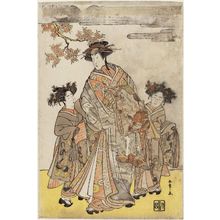