One very important contribution that Shunshö made was his nise-e or niga-o (likeness paintings), which are stylized but accurate renditions of actors. Shunshö revitalized the conventional Torii actor prints by introducing a greater measure of realism and individuality into ukiyo-e actor portraiture. Actor prints began functioning more and more like today's pop star's posters. Along with his own pupils, artists from other studios followed suit in developing niga-o, particularly artists of the Utagawa School. According to leading Japanese scholar Dr. Tadashi Kobayashi, Utamaro's ökubi-e (“large head pictures” which focus on the upper half of the sitter's body) were developed from Shunshö's stylized niga-o. (from “Capturing Actor’s Spirit / Shunshö” exhibition 1/15/2009-) 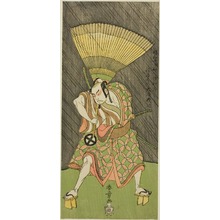