The actor Nakajima Mihoemon appears in the role of Tokihira (Shihei), in Kurumabiki (a carriage stopping sequence) from the play, “Sugawara Denju Tenarai Kagami,” presented around 1747 at the Ichimura-za Theater. The play was originally written for the puppet theater (Bunraku) and staged for the first time in August 1746 in Osaka at the Takemotoza Theater. It was adapted to Kabuki the following month and staged for the first time in Kyoto. It was also performed for the first time in Edo, at the Ichimuraza Theater, in March 1747. The play is made up of five acts. ""Kurumabiki ” is the scene that opens Act III. It was not in the original puppet play. This Kabuki-created scene was so successful that it was later integrated into Bunraku performances as well. The play is based on the life of Sugawara no Michizane (845~903), a famed scholar who was promoted to the prestigious rank of udaijin (""Right Minister,"" one of the two close advisors of the Emperor). After being falsely accused by Fujiwara no Shihei, the ""Left Minister"" (sadaijin), of plotting to seize power, Michizane was exiled to Kyushu. He dedicated his last years to writing poetry that expressed both his homesickness and his innocence. After his death, a number of unusual weather disturbances and agricultural disasters occurred. Furthermore, the Emperor's residence was repeatedly struck by lightning. Many attributed the bad luck to Michizane's vengeful spirit. A shrine was built in Kyoto to appease his spirit (Kitano Temmangü), and Michizane was deified as the God of Scholarship. In the play Michizane is called Kan Shöjö. (from “Capturing Actor’s Spirit / Shunshö” exhibition 1/15/2009-) 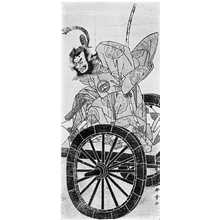 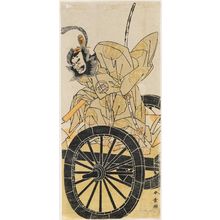