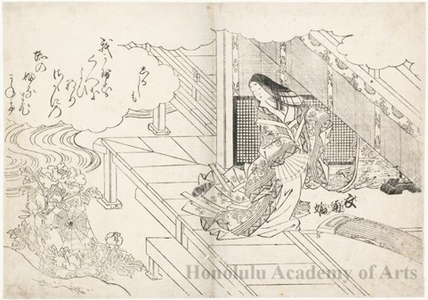 This print was conserved with the support of the Robert F. Lange Foundation. This early black and white print presents Princess Sotoori, legendary beauty and concubine to Emperor Ingyö (412-456). The eighth-century Nihongi (also known as the Nihonshoki, or Chronicles of Japan) describes her countenance as so radiant that it shone out through her clothes (sotoori ). The intricate composition of the print depicts the princess as a Heian-period female aristocrat standing on a veranda, dressed in a twelve-layered formal court dress and holding a fan. The depiction is historically inaccurate, since Princess Sotoori lived centuries before the formal dress styles of the Heian court were developed. This scene portrays a well-known episode from the Nihongi in which the princess thinks fondly of the emperor, unaware that he is observing her, and composes the following poem, visible on the left side of the print: I know in advance from the acts of the spider like a tiny crab: tonight is surely a night when my beloved will come. (translation by Helen Craig McCullough) In ancient Japan, it was believed that a spider clinging to one's garments was a sign of a lover's arrival. This poem made Princess Sotoori famous, and she later became a deity of poetry. 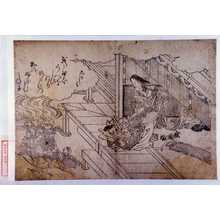