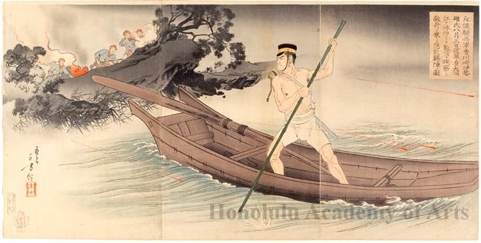 This print depicts a famous contemporary event from the Sino-Japanese War of 1894-5. On the night of August 3, Sergeant Iseo Kawasaki braved the river at Datong by himself to spy on an encampment of Chinese soldiers. Typical of wartime propaganda, the scene is exaggerated, with Sergeant Kawasaki taking an aggressive stance towards his Chinese attackers even as he flees the scene. Compositionally, the straight, vertical orientation of the hero is contrasted with the opposing diagonals of the riverbank rocks, boat, and, most dramatic of all, red streaks of gunfire, creating a dynamic tension. Like many woodblock print designers from the mid-Meiji period, Toshikata experienced momentary success during the war, but spent most of his career in relative obscurity as Western printing techniques rapidly replaced traditional Japanese methods. (from Four Generations of J-Woodblock prints exhibition 11/7/2007-) 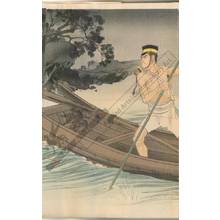 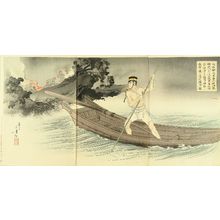 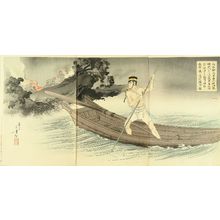 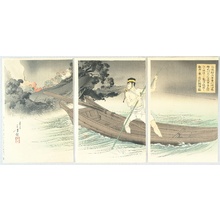