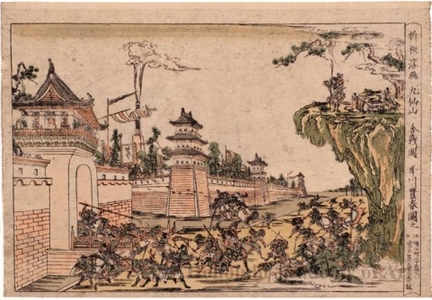 作品名: The Battle of Kyüsenzan (Ch. Jiuxian Shan; The Mountain of Nine Immortals)

The Manchu conquest of Ming dynasty China in the 17th century took over sixty years to accomplish. Even after the last pretender to the Ming throne was garroted in Burma, the Chinese general Wu Sangui kept the Manchus at bay for several years during the Rebellion of the Three Feudatories. The Manchu defeat of Wu Sangui is shown in this print, which borrows its composition and architectural motifs from European engravings. Recent research suggests that Toyoharu's engraving was inspired by the kabuki play Kokusenya Gassen, whose hero was Zheng Chenggong, the anti-Manchu Chinese military leader whose mother was Japanese. (from Uki-e exhibition 2004: June-August) 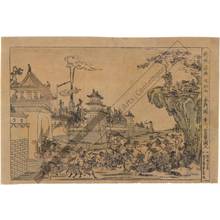 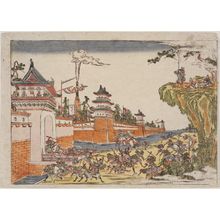