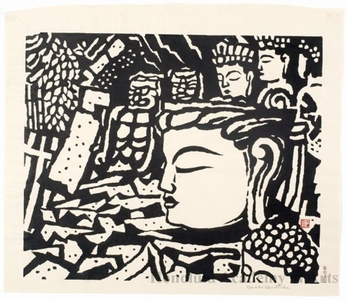 作品名: Fragments of Buddhist Sculpture at the Usuki Site in Öita

画題等: Hiratsuka Un'ichi was born in Matsue city, Shimane Prefecture, in Japan. He trained in Western-style oil painting (yöga) under Ishii Hakutei in Tokyo. With Hakutei's encouragement, Hiratsuka also studied under a traditional ukiyo-e (woodblock) carver, Igami Bonkotsu. The experience led him to teach traditional woodblock print carving when he became an instructor at the Tokyo School of Fine Arts, where he trained many young artists, ultimately including Kobashi among his students. Hiratsuka collected Buddhist prints and roof tiles, leading him to a study of early Buddhist printing. Following recently introduced foreign ideas of individualism and artistic creation, he designed, carved and printed his own works, and became a leading advocate of the new Creative Print (sösaku hanga) movement. From the 1930s, he primarily worked in black and white, creating simple yet powerful images that helped to define this movement, and to distinguish it from traditional ukiyo-e. (“SELF-CONSTRUCTION: THE ART OF KOBASHI YASUHIDE” NOVEMBER 18, 2010-FEBRUARY 20, 2011) ********************************* ALT TEXT Hiratsuka Unichi preferred making black and white prints. According to the artist: Printing in black on white is often considered the first step of technique, but it is actually the final point. One’s own handwriting has the accent of dark and light in a single line. A print is constructed from lines and surfaces on a two-dimensional surface and on it should be contained perspective, volume, and color. Hiratsuka appreciated the ink paintings of Töyö Sesshü (1420-1506) and woodblock prints by Hishikawa Moronobu (c. 1618-1694). Their simple yet unique works of black ink on a white background resonated with Hiratsuka, who saw this particular color balance as a fundamentally East-Asian manner of depicting the essence of an object. In this way, Hiratsuka returned to a traditional method inherited from earlier generations of artists. (from Pathway exhibition 1/29/08-) 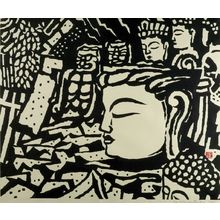 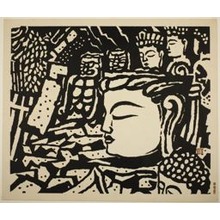 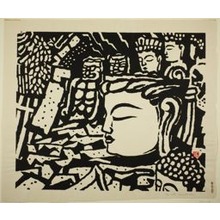 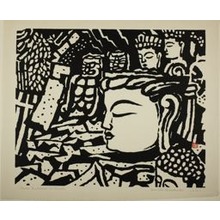