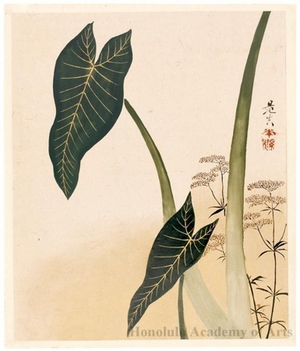 画題等: The long stalks and tapering, broad, veined leaves of taro plants provide a dramatic and bold foreground element in this painting, while in the background is the delicate ominaeshi, frequently depicted as one of the seven flowers of autumn. The signature style suggests a date about 1880. (Howard A. Link "The Art of SHIBATA ZESHIN-The Mr. and Mrs. James E. O'Brien Collection at the Honolulu Academy of Arts" - Robert G Sawers Publishing in association with the Honolulu Academy of Arts, 1979) ********************* This painting is enlivened by a dramatic design accomplished by two long curved lines of stalks creating a large “V” shape, as well as by tapering heart-shaped taro leaves. As both a painter and a print designer, Zeshin used smooth brushstrokes and refined compositional techniques. With his perfect placement, ordinary objects become worthy of admiration. In this work, Zeshin uses a method of lacquer painting (urushi-e) that he invented, characterized by lacquer maki-e (‘sprinkled design’) on paper. A work of this type combines the rich color and clarity of lacquer with the flexibility of brush painting. Many Japanese woodblock prints were imported into Europe and America in the late 19th century, where they deeply influenced artists and intellectuals. One of the stylistic elements adopted from these Japanese prints was the frequent use of natural subjects, including plants, flowers, birds and insects. Such motifs appealed to Western artists because they served as a balance to the social and artistic problems introduced by modernization and industrialization. (“DESIGNED BY SHIBATA ZESHIN (1807-1891)” - DECEMBER 23, 2010-FEBRUARY 20, 2011) ****************************************