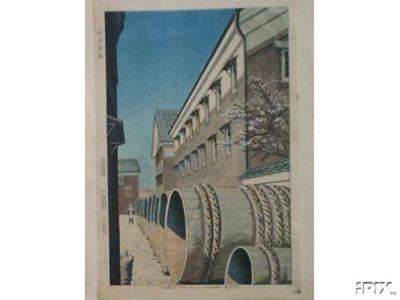 THIS ORIGINAL FIRST EDITION WOODBLOCK PRINT CONTAINS 1) MARGIN DATING, 2) UNSODO WATERMARK, 3) TAKEJI ASANO SIGNATURE. PLEASE READ ON FOR DETAILS. This Japanese woodblock print is titled in English “Early Spring in Fushimi. Kyoto." You can’t see detail on the seals, but the Unsodo publisher’s seal matches that used beginning approximately 1950. The printer’s seal appears to be Shinmi (Niimi), but we are unsure of the carver. Most importantly, there are six characters in the lower left margin that indicate dating, placing this print before 1960. We understand Takeji Asano began his association with Unsodo in 1949. This print also contains the Unsodo watermark in its lower left corner. PHOTO 1 shows the full print (15 ?“ x 10 ?“), which is attached to a backing at 2 points on its right side. The backside of the backing has a sticker reading, “Original Unso-do woodcut print, Printed by hand from original hand engraved wooden blocks. Imported by E&A Imports, Importers of Distinctive Oriental Art, P.O. Box 207, Aurora, Colorado (no zip code).” PHOTO 2 attempts to show you the seals and margin dating. PHOTO 3 attempts to show you Asano’s signature, which is not readable here but matches exactly every other Asano signature we’ve seen. PHOTO 4 shows you the bleed through. CONDITION: we find no condition flaws on the print. The backing has 2 pieces of tape and some edge tears and yellowing. 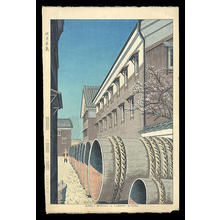 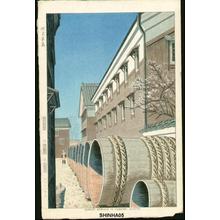