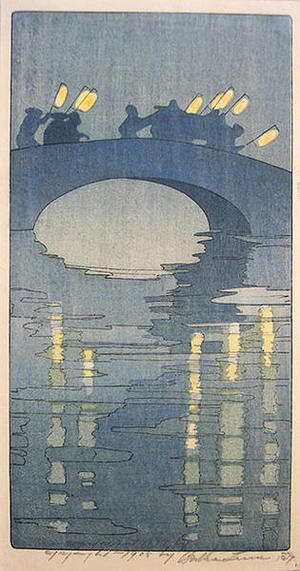 Saturday, 28 January 2006 This is a magnificent original signed limited edition color woodcut print by internationally acclaimed artist BERTHA LUM, (1879-1954), dated 1908. Bertha Lum, printmaker and illustrator, was born in Tipton, Iowa and spent her youth in Iowa and Minnesota. In 1885, Lum attended the Art Institute of Chicago for one year focusing on design and a few years later, studied stained glass with Anne Weston and illustration with Frank Holme. Her honeymoon voyage to Japan in 1903 was the first of many adventures in the Orient. Returning to Japan in 1907 for fourteen weeks, she gained an introduction to Bonkotsu Igami, a master block cutter in Tokyo, who disclosed to her the techniques of carving and arranged for her education in block printing. She had a thorough understanding of color woodcut and opted for the traditional division of labor. Lum moved easily within Japanese society and hers were the only foreign woodcuts in the Tenth Annual Art Exhibition in Tokyo in 1912. Her color woodcuts were awarded the silver medal at the 1915 Panama-Pacific International Exposition and her work was included in the 1919 Exhibition of Etchings and Block Prints at the Art Institute of Chicago. Lum was in California at the end of 1916 and moved to San Francisco in the fall of 1917 but the following years were interrupted with travel and her most extensive stay in California was between 1924 and 1927. The 1923 earthquake in Tokyo destroyed most of her blocks and many woodcuts. She authored and illustrated Gods, Goblins and Ghosts in 1922 and Gangplanks to the East in 1936. Lum's work received honors in Rome, Paris and Portugal and is represented in the Library of Congress, the Metropolitan Museum of Art and the Achenbach Foundation for the Graphic Arts. This spectacular color woodcut is entitled “Lanterns” and is signed in pencil by the artist on the front lower right “Bertha Lum”. It is also inscribed and dated in pencil “Copyright 1908”. It is in excellent condition, measures 5 ?” x 10” and is unframed. Authenticity is GUARANTEED.