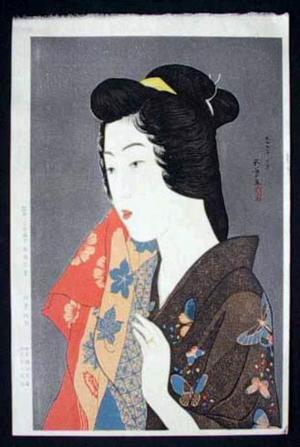 Woman with Hand Towel, 1920 (fine 1970’s woodblock reprint) Hashigushi Goyo (1880 - 1921) Woman with Hand Towel- In this lovely print, a young beauty holds a hand towel to her face. The creamy white skin of her face contrasts the rest of the image with the rich gray/silver mica background, and deep colorful kimono and towel. This Goyo reprint- In the 1970’s a small group of woodblock reprints were made of Goyo’s incredible images. His prints are so rare and sought after, these prints offered an opportunity to have a Goyo print without the expense of an original. These prints of Goyo’s works are the only woodblock reprints ever produced of his prints and are very hard to come by. This print comes with both original folders. It is in the original heavy rag presentation inner folder which fits inside a titled outer folder. See photo with inner folder. The early shin-hanga artists sought a middle ground and attempted to portray the modern woman in the context of traditional beauty and values. The qualities associated with traditional femininity are fused with the contemporary style of art and fashion. These earliest of the shin-hanga prints portray a woman who is unquestionably feminine in appearance and manner. She is beautiful, refined, passive and sensual. This dreamy mood of the shin-hanga beauties evolved from the ukiyo-e bijin print. Goyo the 20th century master- In 1911 Goyo became interested in ukiyo-e prints and specifically the work of Utamaro. Goyo has been referred to as the “Taisho Utamaro” which seems entirely appropriate. Just as Utamaro created the most compelling prints of the Kansei era (1789 ? 1800), Goyo arguably did the same in Taisho. Goyo’s untimely death at 41 in 1921 was a great loss to the world of modern Japanese prints. He left a handful of superbly produced Japanese prints that are great treasures of 20th century Japanese art. Signed- Goyo-ga with red artist’s seal Sealed- In blue in margin by publisher, carver and printer Image size- 5 1/4” x 18 1/2” (same as original- large print) Condition- Perfect, no toning, tears, not mounted, full margins 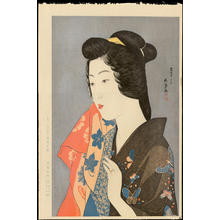 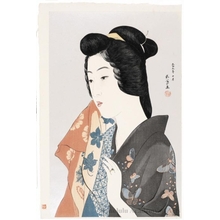 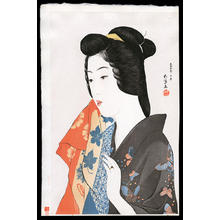 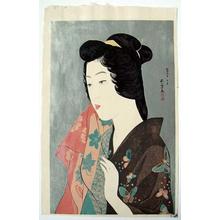 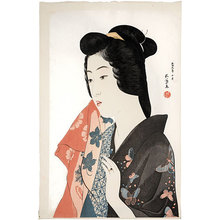 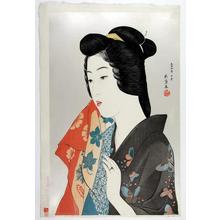 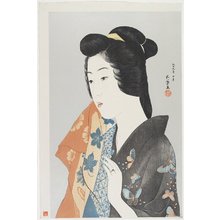 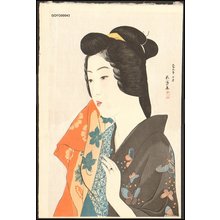 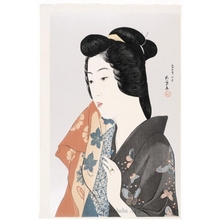 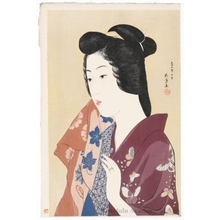 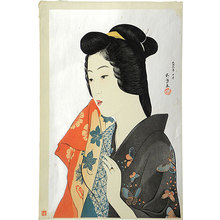