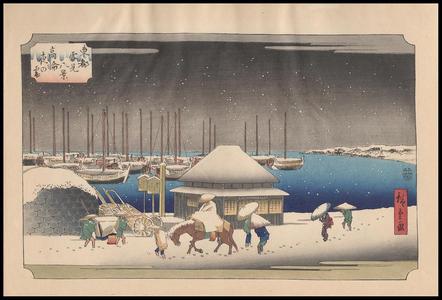 作品名: A Snow Evening at Takanawa

Hiroshige's 'Toto Yukimi Hakkei (8 Snow Scenes of the Eastern Metropolis)' Takanawa Yoru no Yuki A Snow Evening at Takanawa From the website http://ana.lcs.mit.edu/‾jnc//prints/8snow.html (thank you). The First Publication The story of the publication of this series is without doubt one of the strangest of all Hiroshige's works. It would be hard to imagine a finer description of the circumstances than that provided by the original publisher, Mr. Shotaro Sato, and included on a descriptive sheet, which was included with complete sets of the series in a specially designed portfolio: It is with great pleasure that I announce the publication of a hitherto unknown series of eight prints by Hiroshige I, from the artist's original drawings in the possession of M. Emile Javal, a judge in the Civil Court of the Seine, Paris, France. These drawings were executed in the priod between the last two years of Tempo to the end of Koka (1842-1847), which may be called Hiroshige's golden age when his art reached its fullest maturity. How it had been that they were not engraved and published but were carried away to Europe is an unexplained mystery. As they bear the impressions of the seal of the Nanbushi (ward head-man) Fuka-Tsu Ihei, who acted as the official censor of publications in the fourth and eleventh months of the years from 1840 to 1847, it is evident that their publications was intended and had been approved. In trying to account for the fact that following the censor's approval they were not handed to an engraver, I can only suggest that in some way, perhaps as a consequence of the death or failure of the Edo publisher for whom they were designed, they may have been bought by someone who took them to Nagasaki and sold them to a Dutch trader who sent or carried them to Holland, in the the days before the Meiji Restoration. Be that as it may, they are now precious possesions of M. Javal who showed them to me when I paid him a visit in 1927, and who graciously gave me his permission when asked for the privilege of puhlishing them. As the drawings are in black and white only, and are without directions by Hiroshige for the coloring of the prints which should be worthy of him, they called for the exercise of painstaking care. The first step was to get together as many of his snow-scene prints as possible and to study his method of coloring them. The next step was to engage the services of Yujiro Maeda, the best print-block engraver in Japan, and Mr. Gasen Oiwa, the best printer, both of them highly skilled crafstmen who had experience in engraving the works of Seiho, Bakusen, Kampo, Suizan and Koei, all well-known Kyoto artists of the present day. Next, when the key-blocks had been engraved by Mr. Maeda, the advice of an artist who is a color-print expert was sought and many trial colorings were made in an endeavour to assimilate Hiroshige's coloring as closely as might be. This took much time, but at last for each of the eight subjects a color scheme was evolved which we venture to think he would have approved, and which we belive to be very nearly, if not exactly, what he would have designated. Finally, when the color-blocks had been engraved, Mr. Oiwa took the printing in hand and has spared no pains in his effort to produce prints that should rival those issued in Hiroshige's own lifetime. These eight prints must surely rank among Hiroshige's acknowledged masterpieces. A foreign expert has said that 'Hiroshige was an artist of snow and rain'. He was certainly excelled in the representations of snow scenes, and these are in his very best manner. In my opinion there are no other works by him that more fully portray the varying moods of Edo in winter than do these prints. As a publisher I am proud and happy to be able to add one more to the series of eight wonderful prints by this great artist. Shotaro Sato Publisher Kyoto, July 1st, 1928 Later Impressions It appears from material included with some of these sets that this initial printing, in 1928, was a limited edition of 100 copies. However, it does seem likely that more copies were struck off these orginal blocks, sometime after the original run, but approximately contemporaneously (judging by the condition of prints which seem not to be from the original run). The reason for this conclusion is that prints from this series in most major collections (including those in the Albuquerque Museum, those in the Van Vleck Collection at the Elvehjem Museum of Art, and a set from the library of the Fogg Museum, Boston sold by the dealer Bill Pinckard, which was set number 26) display a two-part seal in the right-hand margin. Other impressions from the original blocks, including this set from Floating World Gallery (which was still in its original portfolio, including the sheet from Mr. Shotaro Sato, and apparently had a publication date of Showa 3, or 1928 - but did not have a set number) do not show these seals. The hypothesis (on little evidence, it is conceded) is that these are later impressions, but from the original blocks. In addition, this series has since been reprinted (from new blocks) by other publishers, including one edition by Oedo Mokuhansha (which is easy to distinguish, as it is slightly larger than the originals, in addition to having different seals in the right hand margin). It does appear that more copies were struck off these orginal blocks, shortly after World War II. According to sheets with publ 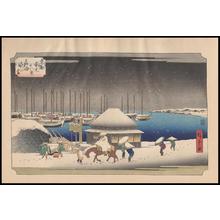 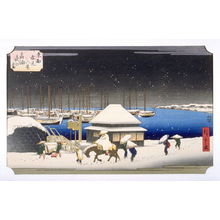 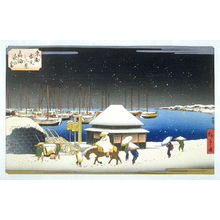 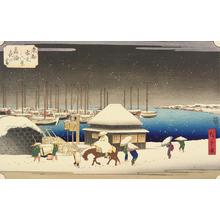 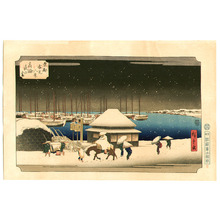 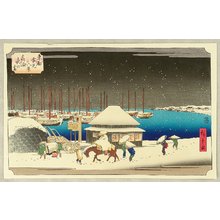