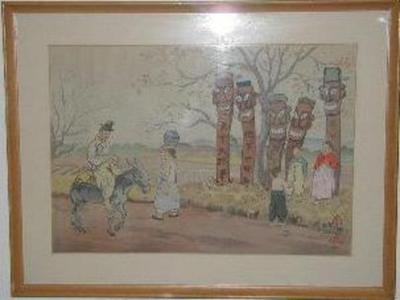 Japanese Woodblock Print Hiyoshi Mamoru This is a nice Japanese Wood block print by Hiyoshi Mamoru of Japan. It has great color and features several individuals including a man on a donkey / mule. The print is signed in pencil, " M. Hiyoshi " and had the stylized Mamoru seal and Shinagawa seal. I also found the following information on the web about this print: I believe that the name of this print is Totem Poles, Korea. I also think that it is in the oban tradition / style. I also found a biograpghy for Hiyoshi: He was born in Tokyo, Hiyoshi Mamoru studied art with Okada Saburosuke and graduated from the Tokyo School of Fine Arts. In the early 1950's, he designed brightly colored woodblock prints of Korean people and their customs. The prints were published by the Kyoto Hanga-in. Many of Mamoru's prints are signed in English, M. Hiyoshi as this print is. 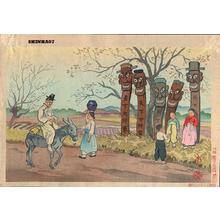 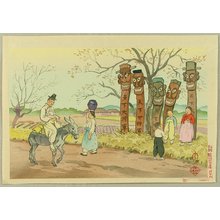