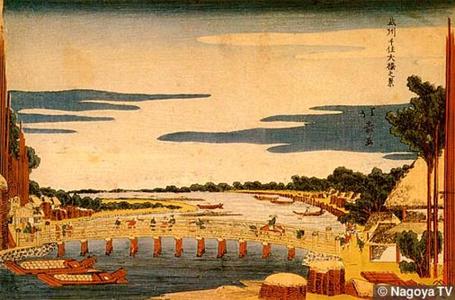 作品名: The Great Bridge at Senju

The Great Bridge at Senju, by Shotei Hokuju (active early 19th century) Hokuju's prints of famous sites have a particular kind of western-inspired expression. The majority of the composition is sky, and the scene has been summed up in an exaggerated form of western style perspective. This print shows the Senju Ohashi bridge on the Sumida River looking down toward the mouth of the river. This scene has been completely swallowed up by modern Tokyo, but during the Edo period as one traveled from the town center of Edo along the Nikko Kaido road toward Nikko, these were the suburbs where you first sensed that change from urban air to the air of the countryside. 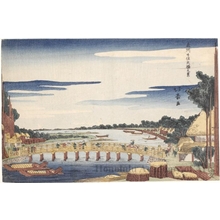