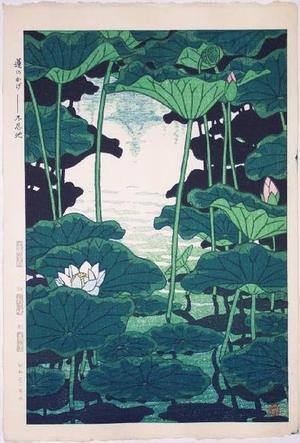 Japanese Woodblock by Kasamatsu ‘Shade of the Lotus, Shinobazu Pond’ (1956) A beautiful close-up lotus flower scene titled in Japanese kanji (left margin) as “Hasu no Kage, Shinobazu” which translates in English as “Shade of the Lotus, Shinobazu Pond” by Shiro Kasamatsu (1898-1991). Bears artist’s signature/seal in lower right corner of image. Print bears Unsodo’s Publisher’s rectangular seal in left margin along with the carver/printer seals of Nagashima/Shinmi. Dr. Andreas Grund’s authoritative reference “The Complete Woodblocks of Shiro Kasamatsu” indicates this print (#U-77) was first produced “Showa 31” (or 1956). Additionally, Nagashima (carver) is known to have worked for Unsodo during the late 1940’s and 1950’s; and Shinmi (printer) is currently in his 90’s and has long since stopped working. Also bears “Gei” watermark (“gei” is the first kanji character of the of the Unsodo Publishers name, "Un-so-do,” which is spelled “gei” if alone) in the lower left corner. Circa 1956?a first edition (only 100 copies printed). Seldom seen, the presence of this print’s original (“kanji”) “margin-dating" seen in the lower left margin indicates that this is considered to be a FIRST EDITION printing. All later editions printed after 1960 LACK this margin-dating, as a that time, the Japanese dates were carved off of the “key-block.” Image measures 9 ? x 14 ? inches. 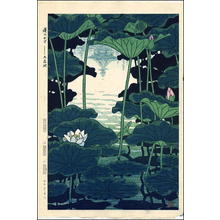 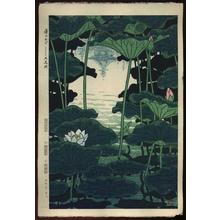