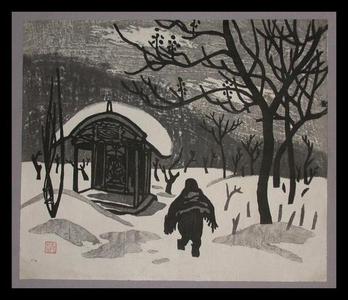 A Superb & Celebrated Japanese Woodblock Print by Kiyoshi Saito. Those familiar with our listings on Ebay will know that we never use the term "museum quality", until now, that is. We have long admired the prints of the Sosaku-hanga movement in Japan and although Saito stood a little apart from the mainstream of this group of artists he was no doubt, certainly in his early years, in sympathy with the aims of Onchi and others of the group. He was born in 1907 and thus was 34 years of age when he designed the group of prints of which our example is one, a series of snow scenes in his home prefecture of Aizu. His character seems to have been a little prickly and uncompromising and he is known to have evolved his own methods according to his instincts and experiments rather than blindly following traditional techniques. Along with Munakata and other woodblock artists he abandoned the traditional method of pasting the sketch to the block and cutting through it into the wood, in favour of actually cutting the block freehand, a technique which could, in the right hands, lend enormous vigour and immediacy to the design. His printing method was even more unusual, the various pigments were laid onto the block in sequence, the print being lifted partially from the block to allow access. This method had the advantage of only needing one block to be cut. Of course, snow scenes in the woodblock medium have always held a high place in the affections of the collector, the snow scenes of Hiroshige especially, are world famous and correspondingly expensive. However, Saito, in these block print masterpieces, achieves an uncanny sense of that strange and characteristic feeling that a heavy snow fall induces in us. The designs move beyond the pictorial beauty of the Hiroshige print into an all-absorbing, almost tactile feeling of cold and stillness, a brilliant evocation of that very special feeling of being absorbed into the beauty and harshness of the snow laden landscape. The figure, with a blanket over its shoulders, approaches a small shrine heavily laden with its coat of snow, the left foot lifted high and one readily imagines the effort of withdrawing one foot and then the other from the deep footprints. Stark leafless trees are etched against the heavy winter sky and the grey hills beyond, with their highlights of snow laden trees seen from a distance. The highly absorbent paper was important in giving the saturated dense black tones that are so dramatic. Oliver Statler in "Modern Japanese Prints" (Tokyo 1956) says that Saito first made the Aizu series in 1941. He illustrates this design at Plate 30. There seems some confusion about this date and it is sometimes suggested that the first designs were done earlier in the late 1930s. The fact remains that they became enormously popular and he reprinted them many times after the war. This example is a very early printing, almost certainly done during or just after the war. It is not generally realised by collectors who are only familiar with the later printings that the early impressions were printed without margins and instead of signing the face of the print in pencil as with his later prints, he had a block printed label attached to the reverse of the print stating "self-carved self printed K.SAITO" with his red seal. Of course, the lack of margins would have made it impractical in these designs to sign the face. The print was acquired just after the war by my old friend, the late Professor Bill Enking of Pasadena University. He was a great Japanologist and was in Japan just after Hiroshima with the American navy. During his years there he met Saito and several other celebrated artist such as Ito Shinsui and Keisuke Serizawa who painted a scroll for him in an inscribed box. He told me in conversation that he acquired this print direct from Saito some time in the late 40s. We are selling the it under instruction from Bill Enking's daughter. The size is 15 1/4 x 17 3/4 ins. (38.7 x 45 cms). Condition is excellent, there is a tiny repaired tear on the lower edge, a small area of thinning of the paper and the remains of tape on each corner (see photos). 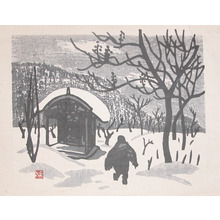 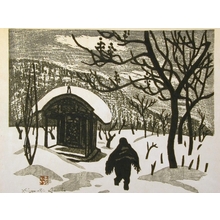