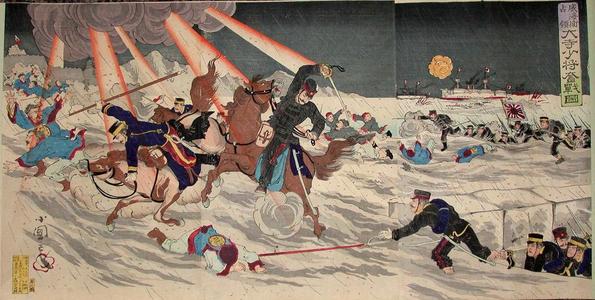 This dramatic design is of an engagement in the Sino-Japanese War of 1894-95. The war was, in effect, Japan's first modern war. The conflict was mainly about control of the Korean peninsular since it had long been regarded as "a dagger pointing at the heart of Japan". It was also the occasion of the last gasp of the art of Ukiyoe in woodblock printing (excepting for the smaller number of prints produced for the Russo Japanese War a few years later). Prints of the conflict were mostly in triptych format and enormously popular, they were apparently produced at a rate of about 10 designs a day! One can readily imagine the feverish activity amongst those engaged in their publication. It is fascinating to see the cavalry charge with the great modern iron warship in the background. The prints reinforced the impression held by the public that the war was about the forces of the enlightened modern age against the reactionary and cowardly forces of the past typified by the Chinese who, naturally, are portrayed as a little less than heroic! Despite the doubtful morality displayed, the prints are often splendid and, as in this example, full of life (and death!) and colour, one can see the driving rain or snow as the forces battle hand to hand with shells exploding above them. The design shows an actual incident in the war, by the artist Utagawa Kokunimasa who worked around 1894-1905. The print is dated 28th. year, 3 month of Meiji (March 1895). and is in fine condition, lightly backed having been mounted as a makimono at some time, but with no damage and no repairs. Overall size 28 x 14 ins.