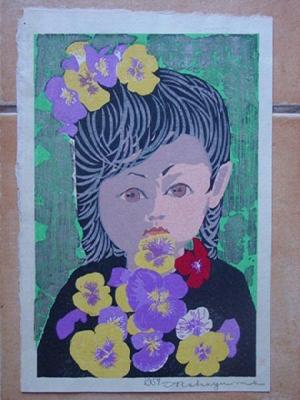 Japanese Woodblock Print Rare Tadashi Nakayama 1957 This is a beautiful original woodblock print by noted Japanese printmaker Tadashi Nakayama. It is an early Nakayama print, dating from 1957. It measures about 13 3/4 x 9 or so (image) plus good sized margins. Outstanding color and impression; appears never to have been framed. Pencil signed lower right, and dated 1957; sealed with a red seal in the lower righthand margin. This is apparently a very rare Nakayama; I have never seen it for sale on ebay (other than when I bought it), and as far as I could tell on a quick pass through the Nakayama catalog, it is not pictured there either. It has the usual metallic pigments, with striking silver in the background. A very attractive and rare Nakayama print!