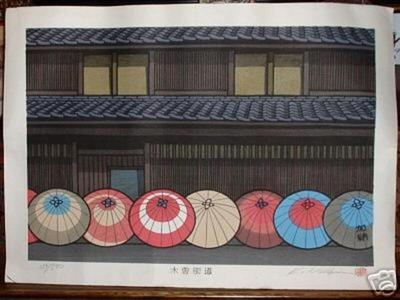 Tuesday, 6 September 2005 It consists of a woodblock print by Japanese artist Katsuyuki Nishijima, that measures approximately 18.5" X 12.5", with a 1 1/4" edge. I have shown several pictures, including the red stamp, the penciled signature and limited edition penciled number,(254/500) and the Japanese title. I do not know the title of the print, but it has the front of a Japanese building or house, with a row of colorful umbrellas (8) lined up in front on the ground. The ink has bled through some on the back, which I have also shown. It comes with a cream colored informational piece of paper that says "The Red Lantern Shop, 236 Shimmonzen St. Higashiyama-ku, Kyoto 605." It goes on to list several dates, including 1945 when he was born, 1964-68, when he worked as a woodblock printer in Kyoto, and 1972 when he began to make woodblock prints. It also says "He considers himself as an accomplished printer rather than an artist. He depicts the sights of Kyoto, Nara, and Shiga Prefecture, using traditional techniques." The bottom of the paper says, "Specializing in fine prints since 1912." 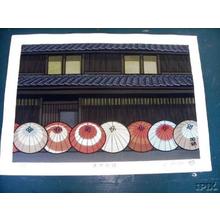