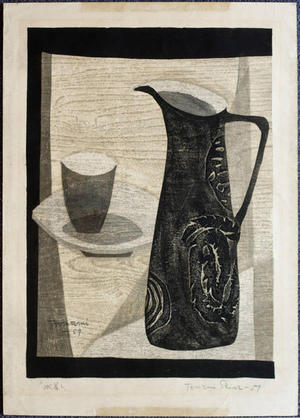 Tuesday, 26 October 2010 This is an original 1959 woodblock print by Tamami Shima (1937-1999). Shima was best known for her inventive use of the woodgrain in her blocks, juxtaposing differing grain patterns as an element in the design of her prints. This print is a wonderful example of that technique. The print is pencil signed and dated by the artist. The print measures 17? x 12? inches (44.5cm x 32cm). The print exhibits some age toning and "mat shadow". In addition there is discoloration along the top and bottom edges from bleed-through of adhesive tape, residue of which appears on the verso as well. None of these defects would affect the image area of the print if it were matted, and even the toning is not disturbing visually. The print is beautifully executed. Depicting a pitcher adjacent to a cup and saucer, each element incorporates a distinctive grain pattern.