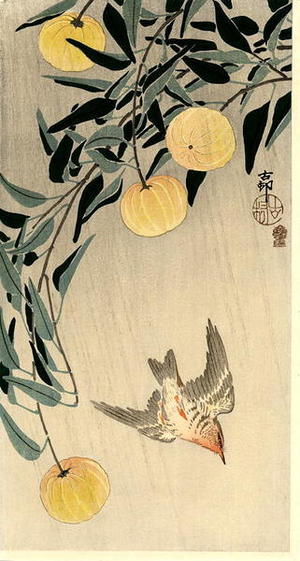 画題等: Cuckoo Artist: Koson Format: O-tanzakuban tate-e: 14" x 7.5" Subject: A Cuckoo (Cuculus spec.) is in flight during a rain shower, a bush with yellow fruit behind. The Cuckoo is a parasitic breeder, depositing its eggs in the nests of Bush Warblers. However, the clear, gentle call of this bird, with its characteristically long tail, pointed wings and zygodactylous feet, makes it one of the most prized songbirds in Japan. It inspired Japanese poets from as early as the 8th century as seen in the Manyoshu, 'Collection for Ten-thousand Generations'. The Cuckoo is understood as a symbol of early summer. For an illustration see 'Crows, Cranes & Camellias', K6.2 page 172, Cat# 4 page 37. Publisher: Kokkeido Date: c. 1910 Condition: Fine colors. Full size. Minor marks and flaws. Generally fine state of preservation. Impression: Fine impression with gauffrage