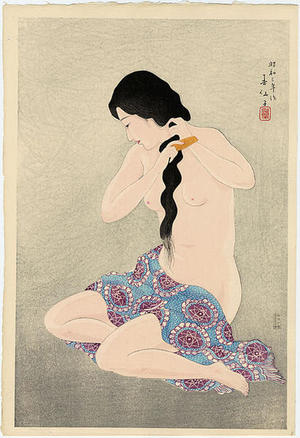 Artist: Natori Shunsen Title: Combing Her Hair Print Type: Original, Limited Edition Japanese Woodblock Print Series Title: Three Beauties by Shunsen Edition size: 150 Date: 1928 Publisher: S. Watanabe Reference No: Female Image, Pl. 160 Size: 15-1/4 x 10-1/2 " Notes: Red limitation seal on the reverse. A Japanese beauty of the 1920s combs her hair after bathing. A rarely seen female nude print by Natori Shunsen, who is best known for his portraits of kabuki actors. Documentation: The Female Image: 20th century prints of Japanese beauties, Hotei, 2000, illustrated on page 121, illustration 160 (illustration has identical seals). In 1916, the same year he released his first full-sized bijin print designed by Hashiguchi Goyo (1880-1921), Watanabe Shozaburo (1885-1962) saw Shunsen Natori's paintings of actors in an exhibition and recruited the artist to design actor prints. He published two prints for Shunsen in 1916 and 1917, and then in 1925 they began a large series, Collection of Shunsen Portraits, which was offered by subscription in numbered limited editions of 150 impressions. Like many of the artists that worked for Watanabe, the subject of Shunsen's designs were primarily limited to his forte, actor portraits. And indeed, Shunsen became one of the leading, and most prolific, artists depicting kabuki subjects. He did, however, create a few works outside of his designated genre, including this bijin-ga, one of a set of three published by Watanabe. References: Yamaguchi, Keizaburo, Natori Shunsen ten (Natori Shunsen Exhibition Catalogue), 1992, p. 74, no. 88. 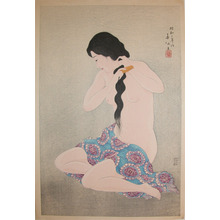 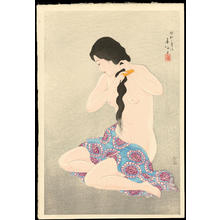 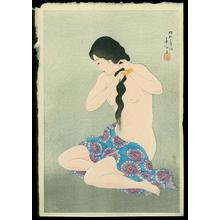 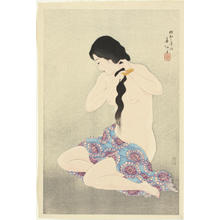 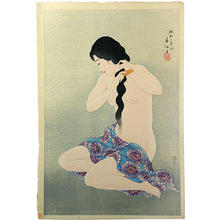 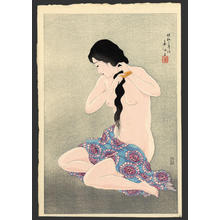 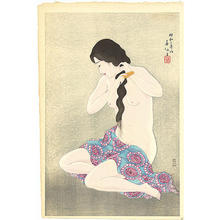 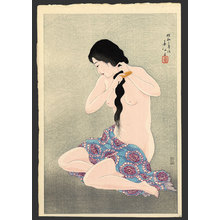 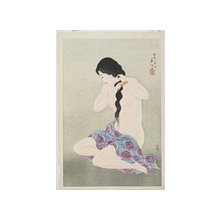