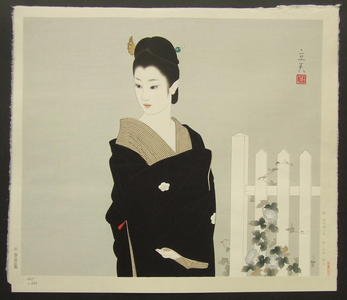 Saturday, 9 December 2006 "Akashi cho" (Garden Corner ) This is an extremely rare woodblock by Tatsumi Shimura (1907-1980). Limited Edition, print 227 of 450. Tatsumi said about this print, "I feel Akashicho (a very old section of Tokyo) of an admiration and admired depth of the image taste since founder of a religious sect Kiyokata* died. There were many kept girls by man in Tsukiji of the Meiji era. The woman who appeared to see off man who returned early in the morning of early fall. The empty sadness that does not know when he next comes. She put a kimono ( called Awase) on chest (heart) on the bare skin unintentionally in unlined clothes, the morning when it is cold. Few flowers of reluctance of leaving look like just a woman standing still." Rarely seen in Japan and nearly impossible to find outside of Japan as Tatsumi prints are extremely rare, highly cherished in Japan and seldom sold. This print is seldom seen outside of Japan. Tatsumi specialized in bijin ga - prints of beautiful women. He is most famous for his series "Five Figures of Modern Beauties" (Gendai Bijin Fuzoku Gotai). Tatsumi’s prints are held by the world’s most famous museums. This limited edition print is numbered 227 of 450. Carver; Kentaro Maeda (very famous carver in Japan), Printer; Ritsuzo Sato, and Publisher; Yuyudo. Red seal says " Tatsumi Ken In" . Size is very large: paper size is 19 and 1/2 inches by 16 and 1/2 inches. Colors are vivid, vibrant and in layers which makes them appear soft. The lines are crisp. Absolutely stunning original hand made Japanese woodblock print. Nearly perfect condition. Deep in the bottom margin has very faint paper blemish, hardly noticeable. Never framed. Additional pictures gladly provided upon request. Comes with original presentation folder which carries the title as " Akashicho". 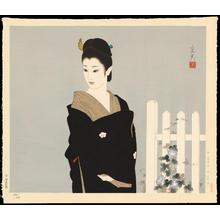 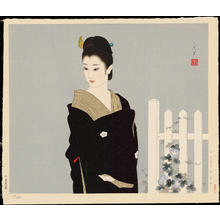 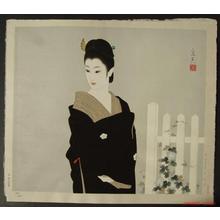 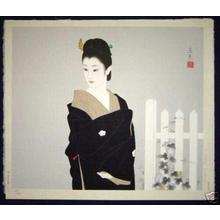