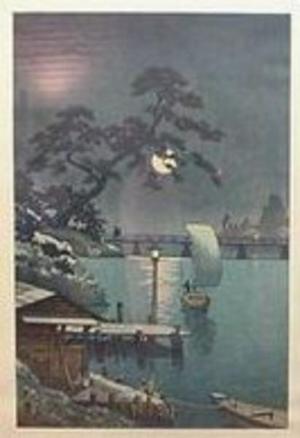 GREAT 1936 KOITSU JAPANESE WOODCUT/PREWAR! This auction features an original signed authentic 1936 Japanese woodcut print by Ishiwata Koitsu (b. 1897) in Excellent Condition. The print is signed in as many ways a print can be. It has the Artist's seal, the signature in pencil and all of the publisher's marks on the sides and is titled in English on the bottom. The print is titled "Kangetsu Bridge, Shimonoshi on Early Autumn Evening" and is signed "Koitsu 1936." The print is in excellent condition with great colors and no foxing or discoloration. The print has been matted and framed but it has not been glued to the matte. There are about 3 "waves" on the upper right hand corner of the paper where the border touches the image area. Other than that, the print is perfect. The frame is a nondescript black plastic frame. This was purchased as part of a fine New York City estate. There are 2 other similar woodcuts up for sale now on ebay from the same estate. The print is 10.5" x 16" and the image area is 9.25" x 14". This print has excellent color and bleedthrough and is a great addition to a collection. (They came from the estate of Edith Gellman who lived on the Upper West Side of Manhattan, New York for over 50 years. According to the family, she purchased these and other signed works over the years from local New York dealers. The family also traveled extensively. These (along with another not by Koitsu which sold on ebay last week) are the only woodcuts in the collection but the two you purchased lived out their lives but inches away and now will be sent to you.) 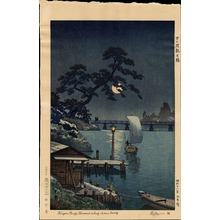 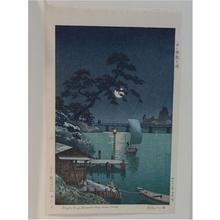 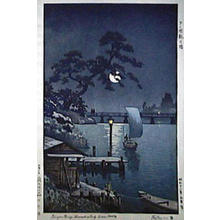