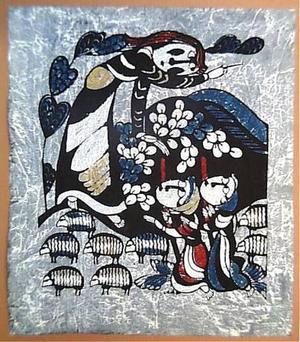 LARGE ORIG. ‾ SADAO WATANABE ‾ STENCIL PRINT‾ON HANDMADE PAPER. Signed and Dated L/R: "SADAO WATANABE 1966", Edition: 33/50 on L/L, and Titled: "ANGEL AND SHEPHERDS" (In English & Japanese) as noted from label on the back (see pic). Out of the estate of the original artist /collector, I purchased this Watanabe and another that I will be listing. This is a large classic example of Watanabe's distinctively Japanese rendition of a Biblical theme that he came to be known for. Instead of the traditional Japanese woodblock, he used Katazome and Kappazuri techniques which are traditional Okinawan folk art styles of stencil dyeing and stencil printing. Much credit is given to Watanabe for bringing interest and preservation to this centuries old method that was used primarily for kimono printing. The richly textured print is on a heavy mulberry paper that has been crumpled, smoothed and washed. The deep charcoal background dye has intensely saturated color and gives depth to the multiple step stencil layers of this beautiful print. Colors and margins are sharp and clear. Print Size: 22" long, 25 1/2 " wide. Condition: Exceptionally fine, non mounted, undamaged, unfaded condition. Original untrimmed edges. The print was matted and framed behind glass, but displayed in a dark corner, thus there is no mat line. Clean, smoke free and ready for mounting and framing or archival portfolio storage. Watanabe Collections of note : The Vatican The White House Folkcraft Museum, Tokyo From a type written paper included with the prints: "Born in Tokyo, where he still lives. Has had no formal art education. Textile designer, he uses natural mineral and vegetable dyes. First background applied to the entire surface with a wide brush. Second, colors applied by hand with a brush. Third black overprinted in one impression by means of a stencil. (shibugami, several thin layers of Japanese paper bound together with lacquer and moisture proofed with persimmon tannin). The paper used for the printing surface is a variation of the kozo type called momi-gami (crumpled wrinkled paper, it's texture is produced by crumpling the paper by hand and then only partially smoothing it out. 'I have always aspired to portray stories and episodes from the Bible. In this disturbed world I would like to heed the voice of heaven.' Watanabe's art illustrates the complete rupture between the modern artist and his Oriental antecedents. It could have been done anytime as it has strong medieval qualities. Artistically these paintings are powerful and persuasive. The links are kept to a minimum and (nominal) structure. It conveys its message quickly and dramatically. He was influenced by Edvard Munch who had a wide appeal in Japan 20 years before Munch was discovered in America."