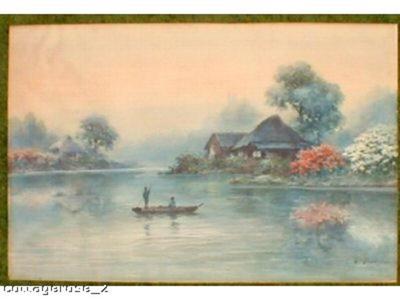 probably A. Yoshida!! EARLY 1900 HIROSHI YOSHIDA PAINTING Watercolor ORIGINAL We are pleased to offer this rare Hiroshi Yoshida watercolor painting. It measures 19 inches by 13 inches. It was painted sometime before 1920. This painting is one of his early works. It is signed H. Yoshida. On the back is a seal with hu 103. The other number, 9859-1 is also on the back of the antiue picture frame, which still has the label of the company that framed the picture. Hiroshi Yoshida (1876-1950) is known as a Western-style painter and wood block printmaker. He was born in Kurume and he lived and worked in Tokyo. He first painted landscapes in oil, BUT WON EARLY FAME AS A WATERCOLORIST. He traveled to America in 1899. Fond of traveling, Yoshida was also an avid alpinist, with mountains and water figuring prominently in his works. He is noted for the subtle colors and naturalistic atmosphere. His works won numerous prizes in Japan and throughout the world, gaining strong Western influences during his travels. A romantic realist, Yoshida's style resembles that of an English 19th Century watercolorist applied to Japanese themes. Yoshida developed an interest in wood block printing in 1920, and was a significant contributor to and organizer of important exhibitions at the Toledo Museum of Art, and his work was well represented, with 113 prints in the 1930 show and 66 prints in 1936. My husband found this wonderful watercolor at a flea market, and because we know very little about fine art, we researched the artist, and we are presenting the information that we found. We believe this watercolor to be an original.